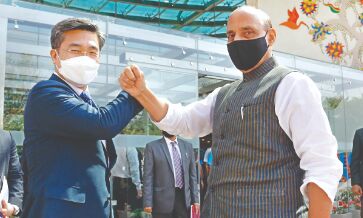 While defence ties with South Korea travelled a distance since the preliminary contact in 2007, it acquired momentum with greater depth and focus after President Moon Jae-in unveiled his New Southern Policy raising the country's engagement with the Association of Southeast Asian Nations and India. That in a way attempts to bring the ties of South Korea with these countries at par with its existing ties with the United States, Japan, China and Russia.

During his visit to India in 2018, President Moon emphasised the priority of his government was a strategic partnership with New Delhi. Defence and security of course remain an important component of this.

In the last few years, defence and security ties have seen an exponential increase and the importance New Delhi attaches emerged from the two pacts signed during the visit of Defence Minister Rajnath Singh to South Korea in 2019. One facilitates logistics supplies between the navies, and the other, enhances defence education exchanges. Back then, South Korea was the third country after the United States and France with which India had such a logistics arrangement. Since then such pacts extended to include all Quad and some coming under Quad Plus countries.

In the maritime sector, India and South Korea have maintained ties since the turn of the century, cooperating in anti-piracy and search-and-rescue operations. That India could provide security in the region especially the straits of Malacca is a matter of comfort and now with the accent turning to Indo-Pacific, the focus becomes sharper.

The New Southbound Policy realises that while engagement with India could result in a growth in economic engagement, the accent on the maritime sector interests South Korea in areas such as shipbuilding, humanitarian assistance and disaster relief, maritime domain awareness, combating marine pollution, anti-terror and anti-trafficking. The shipbuilding industry in South Korea is advanced and Seoul evinces keen interest in developing ties in this sector.

At the March 26 talks, Defence Ministers Rajnath Singh and Suh Wook acknowledged that the bilateral defence cooperation has broadened significantly in scale and scope across Tri-Service as well as agencies dealing with defence technology and industry. Both the countries have also found common ground on several multilateral fora and engagements.

Interestingly, during his interaction, Defence Minister Rajnath Singh maintained that bilateral relations between the two countries are set to grow further and that the meeting between them will give it the necessary impetus to take it to the next level. Does it indicate a 2+2 format? At present, Indian Ministers of External Affairs and Defence meet periodically with their counterparts. The mechanism was set up with Japan, later with the United States, now with Australia too.

Maritime Domain Awareness is one area that promises tremendous scope for cooperation especially in the context of the Information Fusion Centre for the Indian Ocean Region run by the Indian Navy at Gurugram. The Centre takes further Prime Minister Narendra Modi's initiative SAGAR (Security and Growth for All in the Region) for maritime commons in the region. The Centre processes data generated by radars and sensors and shares it with participating countries including those in the Indian Ocean Rim Area.

Towards the end of 2020, Indian Army Chief General MM Naravane paid a visit to Seoul meeting military and civilian leadership. While India and South Korea have signed an agreement to develop in the Military Industry Corridor, defence collaboration is reflected in the K9 Vajra-T, a self-propelled howitzer to be made in India by a leading private firm from South Korea.

Other firms from the country are exploring tie-up including manufacturing minesweepers. Joint production takes the Make in India campaign further while it also provides Seoul with an opportunity to broad-base supplies of crucial electronics and related hardware components instead of relying on China, in particular.

The visit of Mr Suh was time to acknowledge the contribution of the Indian Army Medical Mission under the United Nations during the 1950-53 Korean War. To provide a historical depth to South Korea and Indian connection during the Korean War the contribution of Indian contingent leader General K S Thimayya, who as the Chairman of the Neutral Nations Repatriation Commission and Custodian Force of India was responsible for gathering into camps prisoners those of whom could not be repatriated. The 60 Parachute Field Ambulance that treated nearly two lakh cases and performed 2,000 plus field surgeries did the other significant work.

Now with the changing geo-strategic landscape in the region both India and South Korea are looking towards greater convergence between New Delhi's Act East Policy and Seoul's New Southbound Policy distilling it through the Indo-Pacific and Quad plus constructs.