A visit of hope 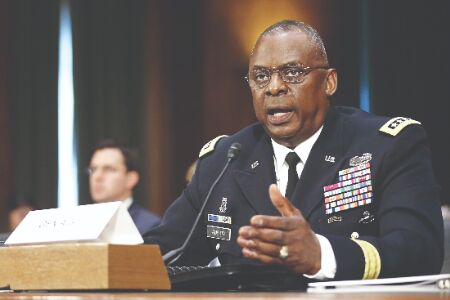 The decision of the Biden administration to send Defence Secretary Lloyd Austin on a visit to India late this month underscores the strong intent of the United States and its commitment to come up with a strategic policy with a sharp focus on China.

Austin would become the first high-ranking member of President Biden's team to arrive in New Delhi. It comes close on the heels of the 2+2 ministerial-level dialogue with India that the outgoing Trump administration held.

What is more significant is the visit comes amid reports of a leaders' meet of the Quad (Quadrilateral Security Dialogue) which the US determined will be the foundation for its Indo-Pacific strategy.

Very early in the term, President Biden and his team consisting of Secretary of State Anthony Blinken and Defence Secretary Austin reiterated Washington's intent in shaping the Indo-Pacific construct, removing doubts on the continuation of the engagement.

The upcoming visit of the Defence Secretary will provide an opportunity for the United States to understand the assessment of Indian leadership of the region and the role of China that is seeking to expand its influence much beyond the continent.

Although India and China arrived at an understanding to disengage from the icy heights in Ladakh around Pangong Lake and troops stepped back, it is considered to be the first step in a series of measures that would translate into de-escalation of the situation that turned bloody last June.

Development at Ladakh and India's ability to stand up to China during the 10-month period offers an insight for the world strategic community and those in the United States on the aggression demonstrated by Beijing and how India countered it.

During his visit to Pentagon in February, President Biden announced the setting up of a task force on China. "The task force will work quickly, drawing on civilian and military experts across the Department, to provide, within the next few months, recommendations to Secretary Austin on key priorities and decision points so that we can chart a strong path forward on China-related matters. It will require a whole-of-government effort, bipartisan cooperation in Congress, and strong alliances and partnerships."

As late as last week, Biden pointed out that one of the key challenges for the United States was the "growing rivalry with China", while on Sunday, Secretary Austin felt that China has been "very aggressive" and in some cases "coercive" in the region with some directed against the US allies.

Austin and his team hit the road running in what some described as 'sprint effort' to come up with a policy vis-à-vis China by May this year. The assessment is that China's postures in the Indo-Pacific region go against the rules-based order through which nations in the area benefit.

Outlining the priority for United States defence forces, earlier this month Secretary Austin said: "We will ensure that our approach towards China is coordinated and synchronised across the enterprise, advance our priorities, integrated into domestic and foreign policy in a whole-of-government strategy, and strengthened by our alliances and partnership…"

While India said it is neither able to understand the reason behind Beijing amassing troops at Ladakh nor was any logical explanation offered by China, commentators on strategic issues attempted to interpret it as a fallout of the 2017 Doklam incident.

India-US ties in Defence are robust, and since 2007, New Delhi signed pacts worth USD 21 billion with the latest acquisition of MH-60 Romeo helicopters and Apache attack helicopters. India has also been accorded Major Defence Partnership status. The United States is in talks with India for the sale of fighter jets for the Air Force and Navy, mid-air refuel aircraft and unarmed, unmanned aerial systems.

The visit would also offer New Delhi a greater understanding of the US moves in the region both in regard to Pakistan and Afghanistan. Contours of the approach of the Biden administration to the pull-out plan of the last 2,500 troops stationed in Afghanistan by May 1 under the Trump administration-Taliban pact could guide India in moulding its policy post withdrawal.

America ending its forever war is linked to its effect on India and apprehension in the United States that the uncertain atmosphere in Afghanistan would undo American and its allies' efforts in the war-torn country.

Pakistan should figure in both the context of Afghanistan and its relations with India, especially on terrorism. India has been steadfast that terror and talks cannot go together and the recent announcement by the military on both sides to adhere to the ceasefire offers a small window.

India's concerns and its assessment of the situation in its immediate neighbourhood and in the region, especially the Indo-Pacific should provide the new administration in the United States through Secretary Austin to come up with a comprehensive all-encompassing plan.