How will a new Biden administration and Democrat-led Congress affect the existing state of Indo-US relations going into the future? 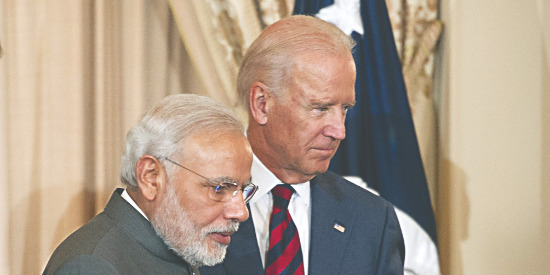 By the middle of next week, the Joe Biden-Kamala Harris administration will assume office in the United States of America. The change the Americans voted for remains contested by a vociferous section of supporters of the outgoing Donald Trump government. And a sizable number of them left the world aghast at the riotous act on the Capitol Hill.

The political jostling on the impeachment of President Trump in the United States Congress notwithstanding, on January 6, the Halls of the US Congress witnessed an unprecedented attack inside the parliament of a country whose President gave the talisman of a government as: "Of the People, By the People, For the People".

The centuries-old building adorned by the Statue of Freedom remains a witness to the act by this mob clashing with the Capitol Police disputing the votes in the presidential elections on the day Congress was completing its constitutional duty. This development will form an unforgettable backdrop as Washington DC prepares for significant changes from January 20, 2021.

For after over a decade, the Democratic Biden administration in the White House can draw comfort that the party is in control of Congress albeit with a slender majority in the House of Representatives and a casting vote edge through Vice President Kamala Harris in the Senate where both the Democrats and the Republican hold 50 seats each.

The altered political landscape offers the incoming administration an elbow room to effect changes the Democrats promised to the people of the United States and chisel its approach to the world, articulated through the campaign and positions held by those who will occupy prime positions in the new government.

How would this change translate for India is what should be of interest to the policy planners in New Delhi. Notwithstanding the fact that relations with India enjoy bipartisan support in Washington DC, it is important to note that when the Biden administration hits the road running, pulls and counter-pulls would come into play in the two distinct branches of the governance structure in the United States, Congress and the executive.

The US Congress is a separate branch and every government is acutely aware of the need to work its way through the corridors of the Senate and the House with deftness. Unlike President Trump, Joe Biden brings to office immense advantage of one who can craft a foreign policy and boast of personally knowing most leaders on the world stage since his days as the Chairman of the powerful Senate Foreign Relations Committee and as the Vice President in the Obama administration.

The Biden-Harris administration is familiar with India and everything connected to the country, its people and most importantly the large and influential Indian-American community who play a significant role in American politics.

Then there will be key aides in the incoming administration who are either Indian-Americans or those whose familiarity with India needs no emphasis. Secretary of State-select Anthony Blinken, National Security Advisor Jake Sullivan, William Burns as the Director of the Central Intelligence Agency and Kurt Campbell, tipped to be the pointsman for Indo-Pacific, are the people who, over the years, remained engaged with India.

That the United States administration is guided by its well-rounded institutions should lend weight to its approach crafted by the National Security Council, which among others has Tarun Chhabra, Sumona Guha and Shanti Kalathil, with an accent on human rights.

Shades of what India should keep a watch on include countering any lingering perception of its proximity in relations with the outgoing Trump administration, and the approach of the Indian-Americans on the Capitol Hill. Of the later, Pramila Jayapal and Ro Khanna have been more vocal in raising issues during the previous Congress.

Biden administration's direction notwithstanding, New Delhi will have to intensify interaction with the lawmakers, who are substantially influenced by the constituents and their issues including those in their countries of origin.

For India and the Democrats, the H1B visas is a legacy issue that would have to be dealt with from the prism of domestic compulsions of accommodating local workforce and balance it against the requirements of the industry.

Post-Trump, jobs for locals and manufacturing in the United States will remain hot button issues alongside migration and visas. One issue that remains on the table but talked less is the long list of Indians waiting patiently to convert their status to Green Card.

These should be looked at from a larger perspective of the Democratic Party's policy on undocumented immigrants amid concerns of the misery the Trump administration policy of deportation and forced separation of families, triggered in the United States.

Any administration in the White House knows that to further its agenda it will have to negotiate with Members of the Congress. A majority is no guarantee on contentious matters. Simultaneously countries too, embark on independent outreach on the Hill.

In the past, the Indian-American community did some heavy lifting in this regard with the outreach on the Civil-Nuclear Deal as a shining example. It is equally heartening to note that the Indian Embassy under Ambassador Taranjit Sandhu engaged in quiet diplomacy with members of the Congress during the period the attention was on the polls. The engagement with a new administration and Congress has just about begun.