Against the backdrop of changing geo-political landscape, Russian FM’s Delhi visit seeks to extend longstanding ties between the two nations 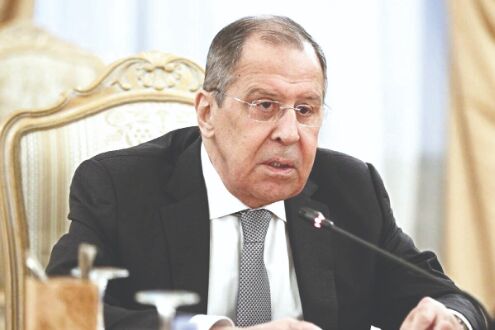 The' Druzhba-Dosti' between India and Russia was rekindled this week with Foreign Minister Sergei Lavrov's sojourn to Delhi on Tuesday, a trip that comes amid the changing geo-strategic landscape in the region and the world.

Since the advent of 2021, the world is looking different after the United States under President Joe Biden committed to regaining the leadership role Washington is accustomed to for decades.

The first assertion came in the form of a strong backing to the Quadrilateral Security arrangement that triggered different reactions from Beijing and Moscow, with both countries coming up with its own interpretation of the development.

India is now in the middle of this in the region with China as its immediate neighbour and Russia, an old friend, with which the ties date back to the erstwhile Soviet Union.

The Special and Privileged Strategic Partnership of Delhi and Moscow in force since last decade and 20 annual leadership summits behind ties of both countries came in for review as External Affairs Minister S Jaishankar and his Russian counterpart Lavrov exchanged notes.

Coming as it did in the run-up to the annual Summit that could not take place last year on account of the global health pandemic, the visit of Mr Lavrov allowed both India and Russia to share perspectives on various issues including Indo-Pacific and Quad.

With Russia remaining a major supplier of military hardware to India and New Delhi planning to go ahead with the acquisition of the S400 missiles defence system, amid a looming threat of sanctions by the United States, both sides explored ways to deepen defence cooperation.

India under its ambitious Make in India programme and promotion of defence corridors in southern and northern India offers a unique opportunity to Russian manufacturers to set up industries in the country. Besides decades-old ties in the sector, Russia is among the first countries to offer the transfer of critical technology to India, which many western countries are not keen to part with.

While the Russia-India cooperation in the field of defence is well known and established, another area of such deep engagement is the exploration of outer space. Way back in the 1980s, the first and only Indian to have reached space was Squadron Leader Rakesh Sharma aboard the Russian Soyuz spacecraft. Besides assisting the Gaganyaan programme, Russian scientists are working with Indian counterparts to develop engines.

In the post-COVID era with countries around the globe working to develop reliable and dependable supply chains, India too is working on the same path and Russia can play an important role. Among these, include the latest concern of the world – vaccines to inoculate the people.

India has already demonstrated its leadership role in the sphere by providing vaccines to many countries and is also in the process of exploring the production of the Russian-made Sputnik. Besides, Russian manufacturers could explore making Indian-developed vaccines for the greater good.

With recent developments in the neighbourhood, both sides have stakes, especially in Afghanistan. At the recent Dushanbe Heart of Asia conference, India underscored the need for 'Double Peace', both within Afghanistan and around the war-torn country. India emphasised it remains supportive of all the efforts being made to accelerate the dialogue between the Afghan Government and the Taliban including intra-Afghan negotiations.

Recently, Russia took the initiative to organise an 'extended troika' meeting with the United States and China, inviting Pakistan to be at the table. While for the past few years, Russia and the United States remained engaged on developments in Afghanistan. India was not part of this, a move that did not go down well with India.

The Delhi meeting with Lavrov provided an opportunity to understand Moscow's roadmap considering India's own sensitivity and its extended neighbourhood. In an interaction with a leading English daily, Mr Lavrov underplayed the notion that India was kept away from the meet at the behest of Islamabad.

The Russian approach to achieve stability and enduring peace in the region would require the agreement of all sides in Afghanistan arriving at a durable arrangement of power. Exclusion of any group would lead to hostilities that go against the interests of all.

India and Russia also remain in touch with each other in several multinational arrangements like the United Nations Security Council with Russia being a permanent member and India having joined this year as a non-permanent member. Other fora include G-20, Shanghai Cooperation Council, Russia-India-China trilateral and BRICS, where India is the Chair this year.