With the Defence Ministers’ Conclave, India steps up its effort to foster the development of stability, prosperity and peace in the Indian Ocean region 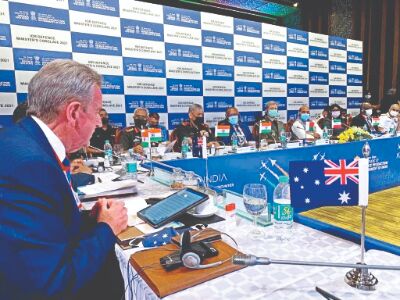 The Conclave of Defence Ministers of Indian Ocean Region last week is a significant development in India's quest for a strategic role in the waters around it. The hybrid event marked the activation of an initiative by New Delhi indicating the role the country seeks to play in the region where aggressive postures of China remain a matter of concern.

The event was woven into the country's premiere Aero India show at Bengaluru last week. It saw the participation of 26 of the 28 countries in the Indian Ocean Region including the Defence Ministers of Maldives, Comoros, Iran and Madagascar besides several Ambassadors/High Commissioners, reflecting the importance the countries in the region attach to the structure.

The presence of Comoros and Madagascar in the Indian Ocean Region (IOR) conclave became a reality after the Government expanded its structure in December 2019 by bringing together all major island nation-states from Madagascar to Sri Lanka under this umbrella.

The clubbing of western Indian Ocean countries like Comoros and Reunion Islands, that under the earlier order, came under different territorial jurisdiction within the Ministry of External Affairs shows India is firming up the contours of its view of the larger Indo-Pacific construct. Cohesiveness in the geographical boundaries should bring about clarity at a time when there are different perceptions on Indo-Pacific, which now is getting increasingly delineated.

The onset of global health pandemic put on hold the events around it and its IOR sub-constructs. At the first available opportunity, India moved forward to hold the Defence Ministers' conclave, noting the participation as a desire of the nations in the region to work along with each other.

India envisages IOR as a symbol of the collective desire of countries in the region to work together – aiming to deepen economic and security cooperation in the littorals – while enhancing capacities to safeguard land and maritime territories with special emphasis on sustainable development.

Importance of IOR can be gauged from the fact that some 75 per cent of global trade, two-third of world's oil shipments, a third of bulk cargo traffic and half of the daily global trade passes through it. That the region remains centre of attention finds reflection in a recent statement of the Chief of Defence Staff General Bipin Rawat that over 120 warships of extra-regional forces are deployed in the IOR in support of various missions.

India's approach to the Indian Ocean was articulated in 2015 by Prime Minister Narendra Modi as SAGAR (Security and Growth for All in the Region) and since then, the focus remains on areas such as security, commerce, connectivity, fight against terrorism and cultural exchanges. Adding to it are projects like Sagarmala and Mausam.

While India is building its capacity, China is making an effort to increase its presence in the region. Beijing's focus in IOR in general and western Indian Ocean in particular, both for its growing economic and energy interests, is a subject of study. China is developing its military and economic capabilities to project its power far away from its shores.

China is expanding its energy, economic, trade and infrastructure links with littoral states in Africa. Countries in the region are also keen to expand their relations with India. The statement by the Defence Minister of Madagascar Richard Rakotonirina makes it categorical. In interviews during his visit to the conclave, he emphasised that India is a key player in the Indian Ocean and it represents a security umbrella that maintains peace and prosperity in the region. On the part of Madagascar, the country wants to deepen defence relations with India, especially in the maritime sector.

India's natural geographic location is an advantage as the Indian Ocean is easily accessible to the Indian Navy that demonstrated its capabilities during the relief and rescue operations that it undertook during the 2004 tsunami crisis. India also assisted countries like Maldives, Seychelles and Mauritius during the crises the governments faced and was active in anti-piracy operations off the coast of Somalia since 2008.

An important takeaway from conclave should be the reference by Defence Minister Rajnath Singh offering weapons to countries in the IOR. This would be tracked with interest in the neighbourhood, the expanded region and the world as New Delhi makes effort to translate this into deeds amid the local resistance to its effort to build or upgrade facilities in a couple of Island nations in the region. Challenges do remain.