Technology, is the best tool to provide government schemes to the general public 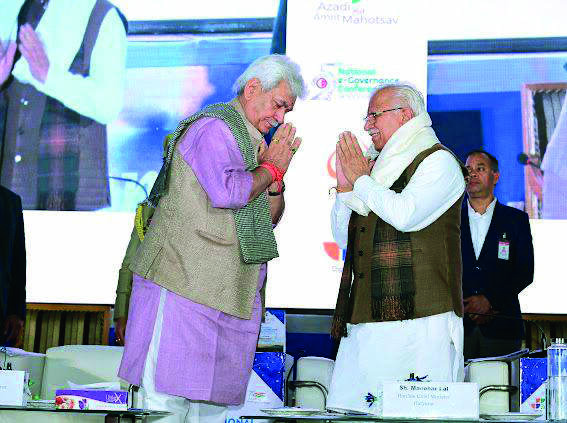 Chandigarh: Haryana Chief Minister Manohar Lal Khattar at the 25th National Conference on e-governance organised in Jammu toda signed a Memorandum of Understanding (MoU) in the IT sector with the government of Jammu. Lieutenant Governor of Jammu Manoj Sinha was also present on the occasion.

Addressing the gathering, Khattar said that he is happy to witness a changing Jammu and Kashmir today. Recalling his deep connection with Jammu, he said that he is no stranger to this region; as he had an old association with it and did many works related to the organisation here. "Today's era is of information technology (IT) and with its use; we are trying to bring e-governance by changing the system," he added.

Technology, is the best tool to provide government schemes to the general public.

Khattar said that e-governance means efficient governance in which the needy should get the benefits of the government schemes; this is the true meaning of a welfare state," he said, adding that digitalization in the administrative system has ensured that the benefits of welfare schemes reach the eligible beneficiaries.

He said that technology is the best tool to provide the schemes of the government to the general public. "The Haryana government has brought transparency in the system by using technology. We have promoted IT interventions to streamline the public service delivery system in the state and today, Haryana has carved a niche for itself in terms of digital initiatives," said the Chief Minister.

Haryana government will fully cooperate with Jammu and Kashmir government

The CM said that for balanced development, a state needs to adopt the best practices of other states. In this direction, the Haryana government will extend full cooperation to the Jammu and Kashmir governments in meeting their requirements.

Brainstorming on challenges arising in changing era of technology

The Chief Minister said that the way technology is changing at a rapid pace in today's era with new technologies coming; there is a need for brainstorming to tackle the challenges arising every day.

Before this, Khattar paid obeisance at Shri Mata Vaishno Devi shrine and prayed for the progress and prosperity of the country and the people of the state. Karnal MP Sanjay Bhatia was also present on the occasion.

Khattar said that he was fortunate to get the opportunity to visit Shri Mata Vaishno Devi shrine. "I have prayed that the path of development of the people of our country is paved, everyone's work progress uninterrupted and there should be the welfare of all human beings, '' he added. The Chief Minister said that he has an old association with Jammu as he had worked for the organisation here for three years.