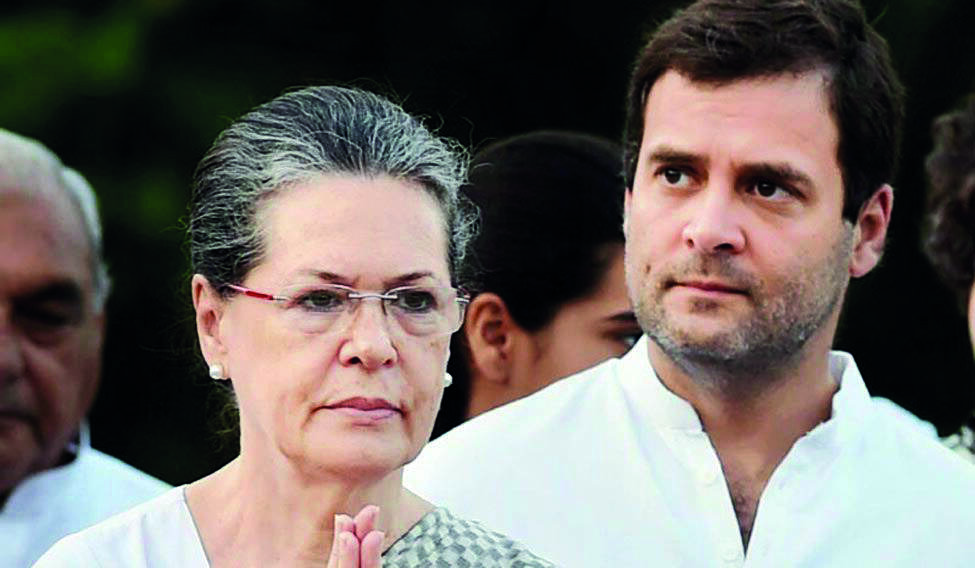 New Delhi: A day before Rahul Gandhi is scheduled to appear before the Enforcement Directorate in connection with a money laundering case, the Congress on Sunday accused the ruling BJP of indulging in vendetta politics while asserting the former party chief "won't back down."

The Congress has decided that all its top leaders and MPs would take out a protest march to the agency headquarters here and stage a "satyagraha" against what the party termed "misuse" of the ED by the Centre.

Senior Congress leader P Chidambaram asserted the summons to the former party chief was "baseless" and said it appears that the ED's jurisdiction does not extend to the BJP members or to states ruled by it. About the ED summons to Rahul Gandhi and Sonia Gandhi and the Congress' decision of a show of strength when the former appears before the probe agency on Monday, Chidambaram said, "I

speak as a Congress member and an advocate. The ED's summons to Rahul Gandhi under PMLA (Prevention of Money Laundering Act) is baseless."

Pointing out that the offence of money laundering requires 'money' and "laundering of money," the former home minister said in the National Herald debt-to-equity conversion, something which lending banks do on a regular basis, there was no transaction of money.

Therefore, how can there be money laundering, he posed.

"It is like accusing a person of purse snatching when

there was no purse and no snatching," Chidambaram argued.

The Congress on Sunday held a series of press conferences -- Sachin Pilot in Lucknow, Vivek Tankha in Raipur, Digvijaya Singh in Bhopal, Sanjay Nirupam in Shimla, Ranjeet Ranjan in Chandigarh, Pawan Khera in Ahmedabad and Alka Lamba in Dehradun -- to express solidarity with Rahul Gandhi and accuse the BJP of indulging in vendetta politics.

Congress veteran Digvijaya Singh said, "No FIR has been registered so far in this case. There is no proof... This is an effort to put political pressure on Sonia Gandhi and Rahul Gandhi. This is politics of putting pressure. It has become the habit of the current regime to frame false cases for political vendetta."

Congress leader and Rajya Sabha MP Ranjeet Ranjan alleged that the ED summonses were part of the BJP-led Centre's "tactic to muzzle the voice of the opposition and divert public attention from issues like inflation, unemployment and the deteriorating security situation in Kashmir."

Congress spokesperson Pawan Khera claimed that the BJP fears Rahul Gandhi as he has the courage to ask questions. "You can't suppress Rahul Gandhi anywhere, that's why you are trying to tarnish the image of Rahul Gandhi," he said in Ahmedabad. In Shimla, Congress spokesperson Sanjay Nirupam accused the Narendra Modi government of "misusing" the CBI, ED and other central agencies to harass its political opponents. The Congress also put out a series of tweets using the hashtag "BJP Vendetta Exposed."

"When the truth begins to come out, so does the ED. But the truth can't stay hidden for long because we will always fight for it," the party said.

In another tweet, it said India is raising its voice against the "hate instigated by the BJP."

"Now the ED has come in to silence this voice. But our voice against hate cannot be quelled. The fight goes on."

When the "caretaker" of the country failed in his duty to protect the integrity of its borders, it sent in the ED to cover its failures, the Congress alleged. "But we will not allow the security of our country to be at risk."

In another tweet, it said, the farmers of India won against the "tyrannical government" and Rahul Gandhi supported them from the start. "Now

the ED is here, trying to suppress the voice that stood with them."

One man has fought for justice for thousands of victims of the "insensitivity of the government," the Congress said.

The ED can't stop Rahul Gandhi from fighting for justice, it said.