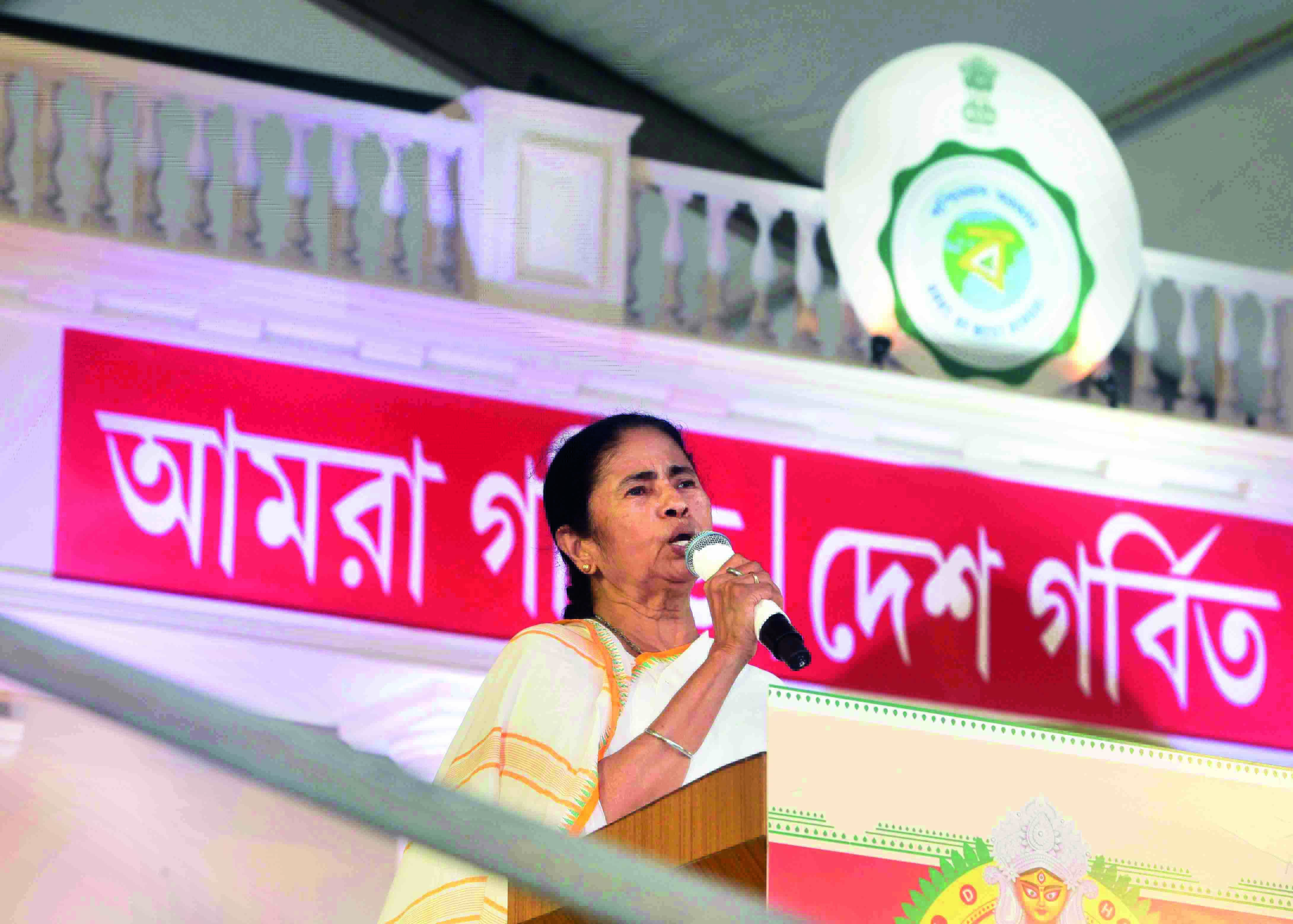 KOLKATA: Chief Minister Mamata Banerjee on Thursday, expressing her gratitude to UNESCO for its global recognition of Kolkata's Durga Puja, extended an invitation to the international body's representatives to come to the city for attending the grand carnival at Red Road slated to be held next month.

A UNESCO team is scheduled to come to Bengal on September 24 for certain collaborative work with the Bengal government. Banerjee urged them to go pandal-hopping to experience the real flavour of the Puja during the time.

The Chief Minister as a mark of thanksgiving on behalf of the state government handed over an earthen and a 'dokhra' idol of Goddess Durga to the representatives of UNESCO along with books written by her and Rabindra Nath Tagore at a programme on Red Road after leading a humongous rally to mark Durga Puja's inclusion by UNESCO in its list of Intangible Cultural Heritage of Humanity. "This is a united world stage. Regardless of our caste, creed, religion, history or culture, we are united in celebration. We are united and I salute this spirit of unity, humanity and harmony. For the people of Bengal, Durga Puja is not just a festival, it's an emotion. We welcome Maa Durga straight from our hearts and worship her with utmost love and sincerity. This is a remarkable historical programme and marks the beginning of festivities a month ahead of the Puja. We feel that one's religion is a personal thing but the celebration is universal," Banerjee said.

She maintained that the support from UNESCO will be a big encouragement for the Puja organisers.

Delivering the message of unity and universal brotherhood, Banerjee said that Durga Puja is celebrated by people of all caste, creed and religion. "During the festival, unity and humanity are the only caste of people. The festival unites people across the world. Durga Puja is an emotion that rises above parochial barriers and brings us together. It unites the magnificence of art with spirituality. We thank @UNESCO for recognising Durga Puja as an intangible cultural heritage and honouring the labour of love of everyone involved," she added. She referred to a study conducted by the British Council and IIT Kharagpur which has revealed that the Durga Puja festival generates a business amounting to Rs 40,000 crore. Timothy Cartis, Secretary of UNESCO who attended the Red Road thanksgiving event said: "UNESCO 's list of Intangible Cultural Heritage exemplifies the diversity of intangible heritage across the world. It is a true testament for creativity and diversity. Durga Puja has undergone a positive change and inclusiveness and has transformed into a community festival. The festival has involved marginal groups and women in participation."

Eric Falt, Director UNESCO said that he had never expected it to be such a grand event. "We will report this to our headquarters in Paris. Durga Puja celebrates the best about intangible cultural heritage as we can see how people from all backgrounds come together to celebrate the festival and this is what makes it so much unique. I have never seen such enthusiasm around Durga Puja. We will be back for the pre-Puja celebrations," he said.

A standing ovation was given to the UNESCO representatives. Banerjee also offered her sincere thanks and felicitated Tapati Guha Thakurta on the occasion. Guha Thakurta has prepared the application dossier on Durga Puja in Kolkata and her research on the art and culture of Bengal has played a major role in Durga Puja's UNESCO honour. She is the Director at the Centre for Studies in Social Sciences, Kolkata.

The three leading football clubs in the city Mohun Bagan, East Bengal and Mohammedan Sporting also handed over the token of gratitude to Falt and Cartis at the programme.

Sourav Ganguly, BCCI president said: "I have travelled all around the world and seen many festivals. But one has to see Durga Puja to believe how big this festival is. You will see a completely different city during the festival. Whether one is rich or poor or powerful or weak, the festival brings happiness for all. Maa Durga brings smiles to all faces." Ganguly along with other officials of CAB (Cricket Association of Bengal) also handed over a token of appreciation to Falt and Cartis.