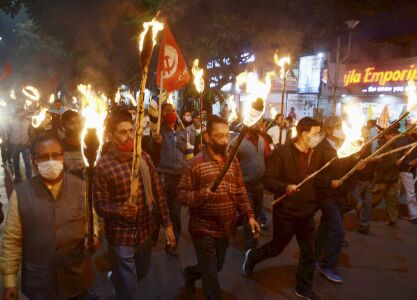 Kolkata: Normal life was partially affected in parts of West Bengal on Thursday due to the nationwide strike called by several trade unions in protest against the Centre's economic policies.

The 24-hour bandh called by a joint committee of the central trade unions began at 6 am.

Bandh supporters, mostly activists of CPI(M)- affiliated outfits like CITU and DYFI, brought out rallies in Jadavpur, Garia, Kamalgazi, Lake Town and Dumdum areas in and around Kolkata, disrupting vehicular movement and asking shopkeepers to pull down the shutters of their establishments, an official said.

They picketed outside Howrah railway station, asking vehicle operators to stop services but a large police contingent was deployed to ensure normal plying of vehicles, he said.

Train services were affected in Sealdah South and Main sections as agitators put logs on railway tracks, he said.

"People are supporting our peaceful protests as it is in their interests," a Democratic Youth Federation of India (DYFI) activist in Howrah said.

The ruling Trinamool Congress in the state did not support the strike but said it backed the Left and Congress' flagging of the economic issues.

The agitating central trade unions, along with independent federations and associations, expect the participation of 25 crore workers in the strike.

BJP-aligned Bharatiya Mazdoor Sangh (BMS), however, is not participating in the strike.

The strike has been called to protest the new farm and labour laws and also to raise various demands, a statement issued by the trade unions said.

Workers in the unorganised sector have also decided to hit the streets to enforce 'chakka jam', it said.

Trade unions affiliated to the Left parties and the Congress had taken out several rallies in Kolkata in the last few days in support of the strike.