'After coming to power, TMC govt would probe the Sitalkuchi incident first' 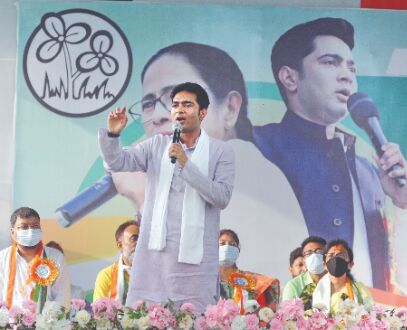 Kolkata: After being elected to power for the third time in Bengal, the Trinamool Congress-led government would first ensure a thorough probe into the Sitalkuchi firing incident and the offender wouldn't be spared, Trinamool Youth Congress national president Abhishek Banerjee said on Sunday.

He said this while addressing a rally at Minakhan in North 24-Parganas. "We will unearth the true facts behind such a ghastly act and will find out under whose order the Central forces fired at four innocent people who had gone to cast their votes at that particular booth in Sitalkuchi, Cooch Behar. The offender, no matter how strong his affiliation may be, will not be spared," Abhishek said.

The leader also addressed another rally at Chakdaha in Nadia district on the same day.

Earlier on Saturday, four persons were killed in firing by CISF jawans at Sitalkuchi in Cooch Behar. Terming the incident as heart wrenching, Abhishek launched a scathing attack on the BJP and alleged that the four persons were gunned down simply because they hailed from poor families and they did not bow down before the saffron party and were adamant that they would cast their franchise.

Reiterating that after the announcement of the election dates the maintenance of law and order was the responsibility of the Election Commission, Abhishek raised questions about the change of Director General of Police (DG), ADG (Law and Order) and the SP of Cooch Behar district by the poll panel.

"The Central force, which fired at innocent people, is also under the Central government. The Home Ministry is

under Amit Shah. So, our party chairperson has rightly demanded his resignation," he maintained.

Earlier in the day, taking to his twitter handle, Abhishek wrote: "EC's servitude towards @narendramodi & @AmitShah is now disgustingly vulgar. BJP's lust for power has blinded them. At least, EC can PRETEND to be impartial! @MamataOfficial can be stopped from meeting her own people for 3 days but how will they take her out of people's hearts?"

The leader said whatever footage was found in connection with the incident had shown that the four people were neither carrying any firearms nor rod or stick.

"The Central force had claimed that they were gheraoed by the local people and had fired in self-defense. They could have fired in the air or aimed at the hands or legs to disperse them. Why did they fire at their chest?"Abhishek questioned.

He appealed to the people to vote for TMC for the all round development carried out by the Mamata Banerjee government and allow her to continue with the development agenda in the coming days. Later in the day, Abhishek also addressed a public meeting at Dum Dum North.