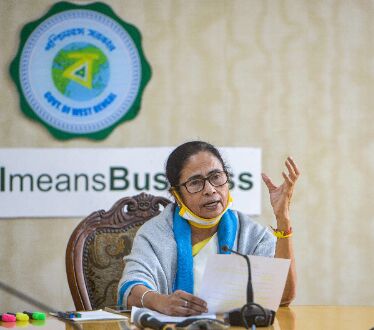 Kolkata: West Bengal Chief Minister Mamata Banerjee on Monday said that the state has incurred a total loss of more than Rs 20,000 crore due to Cyclone Yaas which battered the state last week and around 2.21 lakh hectare of crops were damaged.

The chief minister said that the state has opened around 1200 relief camps in which 2 lakh odd people have taken shelter following the cyclone which made landfall in neighbouring Odisha on May 26.

"Around 2.21 lakh hectare of crops and 71,560 hectare of horticulture have been damaged in West Bengal by Cyclone Yaas. The state has incurred a total loss of more than Rs 20,000 crore," she told reporters at the secretariat.

Banerjee on May 28 submitted a report to Prime Minister Narendra Modi on the damages caused by the cyclone, and sought a Rs 20,000-crore package for redevelopment of the worst-affected areas.

The Public Health Engineering Department has supplied piped and pouches of water to the affected villages, she said.

The chief minister said that repair works for 305 embankments out of the 329 damaged ones have been started.

On the Duare Tran (Relief at doorstep) scheme, she said, "Only those who have been affected by the cyclone have to apply in person. The camps (for the scheme) will be held in schools, colleges and other public buildings and not in ward offices," she said.

Banerjee also assured the people living near Deocha Pachami coal block in Birbhum district that the state government would not acquire any land from them unless they are fully compensated.

With an estimated reserve of 2.1 billion tonnes, Deocha Pachami is the world's second-largest coal block.

Allocated to West Bengal by the Centre in June 2018, the coal block has the potential to bring in investments to the tune of Rs 12,000 crore over a period of time.

"We are not acquiring land from anybody at this moment. The vacant land which the state government has will be used first. And if I need land, I want to assure my brothers and sisters of the scheduled tribe and caste there that it will be taken only after they are fully compensated," Banerjee said.

Banerjee assured local people that they need not worry as she will act as their custodian.

Banerjee advised the people not to pay heed to any instigation.

"All will be employed. Do not fall into any trap. I was ready to sacrifice myself during my movement in Nandigram and Singur," she said.

The state will be highly benefited once the project is completed, she said.