'Would have loved to talk to him about it' 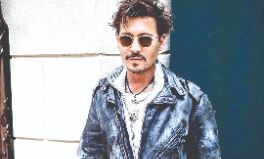 London: Danish actor Mads Mikkelsen said that he wished he could have spoken to Johnny Depp about stepping into play the dark wizard Gellert Grindelwald following his exit from the upcoming third film in the fantasy film series 'Fantastic Beasts'.

Mikkelsen was tapped in as Depp's replacement after the American actor lost a major libel suit relating to abuse allegations by former wife and actor Amber Heard against a UK newspaper in November 2020.

Though he did not know if Depp losing the role was fair, Mikkelsen said he knew the third film was still on track.

"I mean, they were going to do the film and he was not involved anymore," the 'Another Round' star said on Depp.

He added, "But I did not have a dog in that fight. I do not know what happened (in his private life) and I do not know if it was fair of him losing the job, but I just knew that the show was going on and I would have loved to talk to him about it if I had the chance, but I just do not know him in that sense."

The actor, known for Hollywood films 'Casino Royale' and 'Doctor Strange' and Danish movies 'The Hunt' and 'Pusher', was rumoured to be playing Grindelwald in the yet-to-be-titled 'Fantastic Beasts 3' late last year. 'Warner Bros Pictures' had confirmed his casting a week after the reports surfaced online.

Mikkelsen revealed, "They called me and told me that they were in a hurry and I loved the script and so said yes. I know it was controversial for many people, but that is just the way it plays out once in a while."

The actor reiterated that he wanted to add his touch to the character of Grindelwald while retaining a few links with how Depp played the role.

"I did not want to copy what Johnny had done. I think he is a masterful actor, so copying him would have been creative suicide," he said.

Mads further said, "I had to figure out something that was my own and yet also act as a bridge to what he had done. My take is different and the look is a little different, but we will have to wait for the film's release next year to find out."