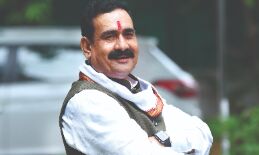 Criticising fashion designer Sabyasachi Mukherjee for his controversial new mangalsutra collection advertisement, Madhya Pradesh Home Minister Narottam Mishra warned that he will take legal action against the designer if the advertisement is not removed within 24 hours.

The promotional photoshoot for the new collection has been widely criticised for featuring models wearing the mangalsutra while posing solo or in intimate positions with others.

A legal advisor for the BJP recently issued a notice to the fashion designer for his depiction of the 'mangalsutra' in the ad campaign, a leading news agency reported.

"I say that in your promotional social media posts featuring models posing solo or in intimate positions with others. In one picture, a female model is seen wearing a black brassiere and Sabyasachi's mangalsutra as her head rests on a shirtless male model is outrageous to the entire Hindu community as well as Hindu Marriage," the notice read.