'Was intrigued by the idea of performing comedy'

Even though he is not a laugh-out-loud person in real-life, director-producer Karan Johar admits being 'nervous, anxious and excited' about his debut as a stand-up comic in the second season of Amazon's unscripted comedy original 'One Mic Stand' 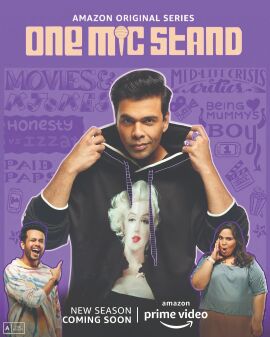 Filmmaker Karan Johar says unlike many in the film industry he can take a joke on himself and that's why he was fascinated by the challenge of making others laugh at his gags in the second season of Amazon's unscripted comedy original 'One Mic Stand'.

Even though he is not a laugh-out-loud person in real-life, the director-producer admits being "nervous, anxious and excited" about his debut as a stand-up comic.

"It's very ironic and strange but I'm not a laugher myself. Even when people have narrated really funny scripts or comedies to me, I always give them a disclaimer that I don't laugh-out-loud, I just don't laugh. Even when I watch comedy, I kind of watch it with a straight face.

"But I've always been intrigued by what would the experience be like if I was on stage and actually being a comic myself because I'm not a laugher but will I be able to make people laugh?" Johar said in an interview.

As a multi-hyphenate film personality, Johar said he looked at 'One Mic Stand' as an "experience and yet another challenge" in his career of nearly two-and-a-half decades.

"I think I'm funny. I'd like to believe I am, but doing stand up set piece is a totally new ballgame," he added.

Johar, 49, said the show, set to premiere on October 22 on Prime Video, would be more about "me, my life, my personality, my issues, my worries, my fears, my insecurities, my pluses and minuses" rather than focusing on other people.

Hinting at his controversial participation along with Ranveer Singh and Arjun Kapoor in 'AIB Knockout' roast in 2015, Johar said he had already "burnt my fingers once at an event like this and I never want to repeat that".

This is why certain kinds of topics will be off-limits, he added.

"By and large, I believe that we have to be very sensitive to our environment. We should be, it's our duty as citizens of our country to be sensitive to many many things. I believe very strongly that sometimes humour is not a platform for many issues to be raised. You know you can't take some things lightly and make jokes and think that in the name of a joke, you can get away with it," he added.

The director, however, said he is someone who does not take himself too seriously.

"I can take a joke on myself but I believe a lot of people can't. I feel we're in an industry full of very sensitive people like you can't go on stage and say something in humour about them.

In the big scheme of things, artists, like everyone else, are "tiny parts of this large universe" and taking oneself seriously is futile, said Johar.

"I don't take myself seriously because I believe we are all really like tiny parts of this large universe so we cannot take ourselves seriously because there're so many bigger, better, stronger, more ambitious things happening on a daily basis around us," he said.

Johar, whose mentor is Sumukhi Suresh, said he has always been a fan of the comic and her hit Amazon show 'Pushpavalli'. The filmmaker also credited Suresh and Verma for helping him through the "beats of this process".

He believes stand-up comedy has come a long way in India with new comics being created and nurtured within the pop culture of the country, finding a stage through streaming platforms and live shows.

"I think it's becoming a true blue new-age phenomenon of entertainment and a new vertical of entertainment. Because it's so connected to today's pop culture, I wanted to be a part of that bandwagon as well in my own tiny way as an attempt."

Before the show debuts, Johar said he will keep worrying about the quality of his jokes and whether he succeeds in making a room of strangers laugh.

"I've hosted, I can't even remember how many shows and been a part of so many events. I'm never worried about an audience no matter how many people are there, but this particular time, it's a different ballgame because every other time you're not compelled to be funny.

"This time, the whole pressure is on you to perform comedy. And if your jokes don't land then there can be nothing more tragic than that. I'm hoping that the comedy lands or it will be a tragedy," he said.

The sophomore season, to be launched as part of Prime Video's festive line-up for 2021, will premiere globally across 240 countries and territories.