'Want to grow and tap into my full potential' 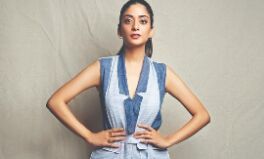 Mumbai: Tanya Maniktala, who is aware that her work post the success of her 2020 series 'A Suitable Boy' will be under the spotlight, said that she does not want to get bogged down by the weight of expectations.

The Delhi-based actor got her breakthrough last year with Mira Nair's 'A Suitable Boy', an adaptation of Vikram Seth's 1993 novel of the same name. The show earned Maniktala global acclaim for her portrayal of the lead character, Lata Mehra.

Tanya said that she is at a stage in her career where she wants to push herself as an artiste and not hold back fearing any 'pressure'.

"As an actor, I want to now grow as much as I can and tap into my full potential. The pressure has increased but I want to channelise it into something that will bring out the productive side in me and not in a way that will dismantle my peace of mind," shared Maniktala.

'A Suitable Boy' released at a time when the county was under the Coronavirus-induced nationwide lockdown.

"The pandemic and the show's release on 'BBC One', followed by its debut on streamer 'Netflix' helped her work reached a bigger audience," Maniktala said.

At a personal level, the 24-year-old actor believes the show's success opened the doors for more work and reaffirmed her passion to act.

"From not wanting to be an actor to now fully pursuing it, that is a big change in me. My family has accepted that I am getting into this profession and are supportive," she admitted.

The actor currently features in the 'Netflix' anthology 'Feels Like Ishq'. Maniktala stars in the 'Ishq Mastana' segment, directed by Jaydeep Sarkar. The short chronicles the story of a spirited activist, Mehr (Maniktala) and a privileged teen, Kabir, played by actor Skand Thakur.

"Romance needs a lot of love. Not just from the actors or the director, but the entire team. We were fortunate to have a great team. All of us clicked with each other, everything just fell into place," said Tanya.

Talking about her character, Maniktala said, "Mehr is a vocal person. If she believes in something, she will go for

it. She has a fire in her, which I found appealing."