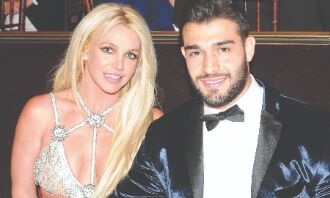 The 'Commando' actor took to his 'Instagram' handle and posted pictures with Mahtani, sharing that the couple got engaged on September 1.

The first picture featured the couple on a rock-climbing wall while in the other, the duo stood holding hands in front of the Taj Mahal, with Mahtani sporting a ring.

Mahtani, who is also in her 40s, shared the same photographs on her Instagram page and wrote, "Could not keep him hanging any longer and said yes! 1-9-21."

On the work front, Jammwal will be seen in films 'Sanak' and 'Khuda Haafiz Chapter II'.

"I cannot believe it," she captioned the video post.

In the clip, the 39-year-old singer could be seen showing off her ring from several different angles with a shocked expression on her face. 'Do you like it?', Asghari asks in the video, to which she replies, 'Yes!'

Asghari, who works as a personal fitness trainer and actor, also announced their engagement on his 'Instagram', where he posted a photograph of him and Britney kissing while the singer flaunts her ring. He captioned the photo with king and queen emojis.

His manager, Brandon Cohen, confirmed the engagement to 'People' magazine.

"The couple made their long-standing relationship official today and are deeply touched by the support, dedication and love expressed to them," Cohen said in a statement, adding that Roman Malayev is the designer of the ring.

The news came less than a week after the singer's father, Jamie Spears, asked a judge to end her 13-year conservatorship.