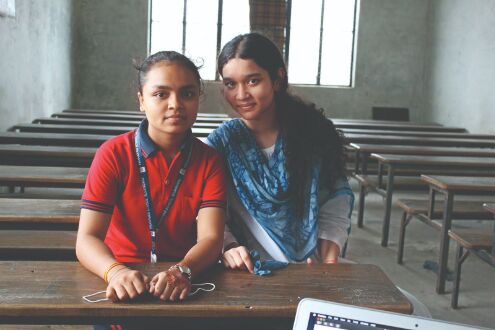 Amaatra Misra, a student at The Shri Ram School Moulsari, has proved that age is just a number. The 16-year-old is running 'Vidyottama Foundation' - a non-profit organisation working towards funding education for underprivileged girls in rural Uttar Pradesh and providing them with educational resources in the form of online workshops and webinars. The NGO helps in providing students with a more holistic, well-rounded education.

While growing up, Amaatra witnessed gender disparities and barriers in her ancestral village located in eastern Uttar Pradesh, India. She noticed girls not being encouraged to work or study and saw them getting married at the ages as young as 15 or 16 years. This, however, constituted only a small part of the problem. The quality of education was sub-par and stigmatisation on menstruation, sex education and gender equality had plagued communities on a very large scale. This is what drove the young girl to start 'Vidyottama'.

The NGO's aim isn't only to fund education, but also to address the issues that will help students grow up to be well-educated and socially aware at the same time.

'Vidyottama' has initiatives that range from scholarships to online workshops on social issues to webinars with industry professionals - everything to help schools the foundation has partnered with.

After kick-starting the organisation in early 2020, Vidyottama managed to raise funds for four girls' education and conducted several workshops in-person and online early this year. Vidyottama is currently running a campaign to fund education for girls residing in urban-slum communities of Bombay. They have partnered with Myna Mahila Foundation which is a globally recognised women's health and employment organisation based in the slums of Govandi. They have impacted over 6,00,000 women at their doorstep with health products and services and aim to reach 2 million beneficiaries by 2025. The Vidyottama X Myna Mahila Campaign aims to expand opportunities for women in urban slum communities in Bombay in the areas of education.

Vidyottama hopes to create more holistic learning environments in the schools they work with and aspires to rid India of the stigmas it holds on the topics that are essential to students' education. In addition to Vidyottama's current campaigns, Amaatra - who is also passionate about filmmaking - is currently working on a short documentary that captures the stories of the Vidyottama scholars that will be released sometime in late July.