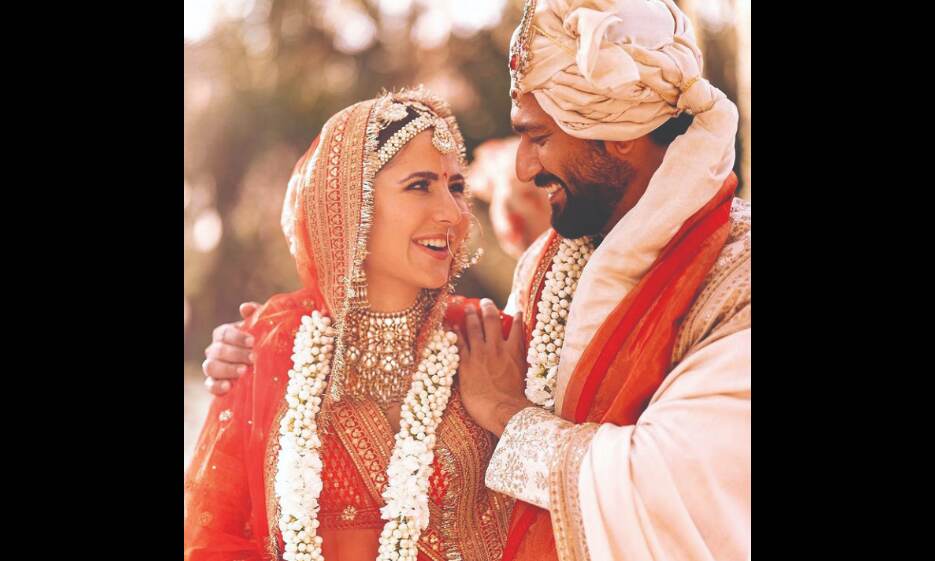 Vicky Kaushal and Katrina Kaif are now husband and wife. They got married in an intimate ceremony at the Six Senses Fort Barwara in Rajasthan on Thursday. While the first pictures of them as newlyweds were shared online by paparazzo accounts, she has now posted pictures of the wedding on Instagram.

"Only love and gratitude in our hearts for everything that brought us to this moment. Seeking all your love and blessings as we begin this new

journey together," Katrina wrote, sharing the photos. In the images, she was seen putting a garland around Vicky, sitting at the mandap holding hands with him and taking pheras.

Although it was Bollywood's latest big-ticket wedding, the whole affair was kept intensely private. From a no photos NDA clause to a compulsory RT PCR test for unvaccinated attendees, the entire ceremony was presumably a spectacular but secretive affair.

After their wedding, the newly married couple was seen heading for a photoshoot. They were seen walking near the corridors of the fort. The couple could not hold back their smiles as they made their first appearance together as husband and wife.

While fans were kept largely in the dark on the days when Mehendi and sangeet were held (December 7 and 8), the media did

manage to snap photos of various guests heading to Jaipur. From Katrina Kaif's family to filmmaker Kabir Khan, actor Neha Dhupia and musician Gurdas Maan, several people were spotted at the Mumbai airport as they got ready to catch a flight to Jaipur. Maan reportedly performed at the sangeet and so did the musical trio of Shankar, Ehsaan and Loy.

As per the reports, a total of 120 guests attended the high-profile wedding.

As far as the sangeet night was concerned, it was a big musical bash, with not only the guests performing, but even Vicky Kaushal and Katrina Kaif themselves shaking a leg at the function. Katrina grooved to her big hits, including tracks like 'Teri Ore' and 'Kala Chashma'.

The couple also cut a cake worth Rs 4.5 lakhs at the sangeet ceremony and danced to Harrdy Sandhu's song 'Bijlee Bijlee'.

Post the wedding, the couple will continue their stay at the luxury resort. A source informed a leading daily that the newlyweds will enjoy their honeymoon at Fort Barwara and will stay there till December 12, post which the couple will return to their respective movie shoots.