Vanessa Kirby to star in The Son 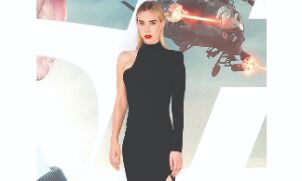 Los Angeles: Actor Vanessa Kirby has been tapped to play a pivotal role in 'The Son', filmmaker Florian Zeller's follow up to his feature directorial debut 'The Father'.

Like The Father, The Son has been adapted by Zeller and Christopher Hampton, from Zeller's critically-acclaimed stage play. The duo recently won the best adapted screenplay Oscar.

The Son centres on Peter (Jackman) as his busy life with new partner Emma (Kirby) and their baby is thrown into disarray when his ex-wife Kate (Dern) turns up with their teenage son, Nicholas.

"The young man is is troubled, distant and angry, playing truant from school for months. Peter strives to be a better father, searching to help his son with those intimate and instinctive moments of family happiness. But the weight of Nicholas' condition sets the family on a dangerous course," the plotline reads.

Iain Canning and Emile Sherman are producing the movie along with Joanna Laurie of See-Saw Films and Christophe Spadone.

Zeller is also producing. Shooting will start in coming weeks.