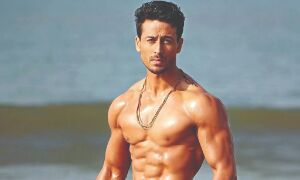 is an emotion to celebrate "independent India."

Shroff, who made his singing debut in 2020 with the track "Unbelievable" and followed it up with "Casanova" earlier this year, said his new song will release on August 10.

The music video has been directed by choreographer filmmaker Remo D'Souza.

"This is the first time I have attempted to sing a song like this. So excited and nervous at the same time to share with you all my next single Vande Mataram.

"It's not just a song but

an emotion that celebrates independent India. Extremely grateful to share a special song, a tribute to our India, our home. Releasing on 10th August," Shroff wrote.

The song will be presented by Jackky Bhagnani and Jjust Music.