'There is inherent sexism in Hollywood' 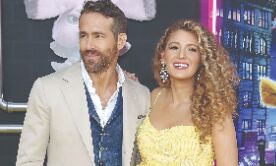 Ryan Reynolds recently appeared on 'SiriusXM' and during a candid chat

the Hollywood actor opened up about how his wife-actor Blake Lively is not given enough credit for his on-screen successes.

big successes," Ryan shared, adding that she is 'really talented as she is multihyphenate kind of person'.

Ryan even looked back and recalled how many of the contributions attributed to him were actually 'thanks to Blake!'

"There is a lot of A++ writing that I have done, but that was Blake as she would jump in, grab the keyboard and say 'What about this?' And I would be like, 'That is incredible'," he shared.

While Ryan does tell the makers of the films that Blake worked on them, the credit eventually ends up going to him.

"Maybe it is because there is inherent sexism in Hollywood. I will say that a lot of times, 'She wrote that. Blake wrote that and not me. That was her.' And they still, later on, repeat the story as 'I wrote it'," he mused.