The pay gap is ridiculous: Sonam 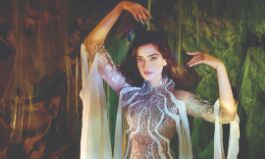 'Veer Di Wedding' star Sonam Kapoor said that she does not go for the roles for which she demands just pay, but she can afford to let go of certain opportunities because she is 'privileged'.

In an interview with a leading newspaper, the Bollywood actor shared that she has no right to judge anybody.

"The pay gap is ridiculous. I can stand up to it, but then I do not get those roles and I'm okay with that. I can afford to do that. I realised over the

past two or three years that I

have no right to judge anybody. I'm privileged, so making difficult choices is not difficult," revealed the actor.

Sonam Kapoor's comments came shortly after 'Haseen Dilruba' star Taapsee Pannu had said that the male actors, who started their careers with her, make three to five times more money than her.

Sonam was last seen in 2019's 'The Zoya Factor'. She appeared in a cameo in 'AK v/s AK', in which she played a version of herself alongside her father Anil Kapoor and filmmaker Anurag Kashyap.

She will be seen next in 'Blind', which is a remake of a South Korean thriller, co-produced by Sujoy Ghosh.