'The golden era comes to life' 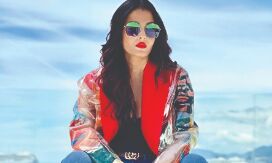 On July 19, Aishwarya Rai Bachchan officially announced that her upcoming project, 'Ponniyin Selvan', will hit the silver screens in 2022.

Taking to her 'Instagram' handle, the Bollywood diva also confirmed that the epic fantasy drama will be released in two parts. Apart from her, the multi-starrer flick features Vikram, Karthi, Trisha Krishnan and Prakash Raj in pivotal roles.

The upcoming historical drama is based on Kalki Krishnamurthy's 1995 novel of the same name.

The film chronicles the tale of one of the mightiest kings in the South. Capturing the early days of Arulmozhivarman, 'Ponniyin Selvan' narrates how the powerful king went on to achieve the title of great Chola emperor Rajaraja Chola I.

Bankrolled under the banner of 'Madras Talkies' in collaboration with 'Lyca Productions', the film's background music has been scored by Oscar-winner AR Rahman.

Apart from 'Ponniyin Selvan', Mani Ratnam is also gearing up for the release of his Tamil anthology flick 'Navarasa'. Touted to be based on nine emotions of human beings, the movie will release on the OTT giant 'Netflix' in August.