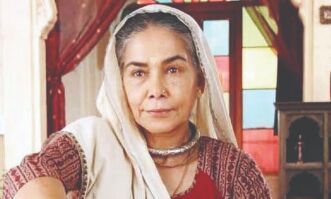 Mumbai: Veteran actor Surekha Sikri, known for her work in films 'Mammo', 'Badhaai Ho' and TV show 'Balika Vadhu', passed away on July 16 at the age of 75 following a cardiac arrest.

"Three-time national award-winning actor Surekha Sikri has passed away following a cardiac arrest earlier on the morning of July 16 at the age of 75. She had been suffering from complications arising from a second brain stroke," said Vivek Sidhwani, the actor's agent.

He added, "She was surrounded by family and her caregivers. The family asks for privacy at this time. Om Sai Ram."

Sikri had suffered her first brain stroke in September 2020.

The artiste leaves behind a rich body of work spread across theatre, television and films.

Best known to contemporary audiences as Dadisa from the popular Indian soap opera 'Balika Vadhu' and the cantankerous-yet-lovable mother-in-law from 'Badhaai Ho!', the Delhi-born artiste spent her childhood days in the hills of the Kumaon region of Uttarakhand.

She completed her graduation from the Aligarh Muslim University (AMU), Uttar Pradesh and then enrolled for the 'National School of Drama' (NSD) in 1968.

Post her graduation from the NSD in 1971, Sikri continued to work in theatre and was attached with the NSD's 'Repertory Company' for more than a decade. She performed in hit productions like 'Sandhya Chhaya', 'Tughlaq' and 'Adhe Adhure'.

To explore other avenues as an actor, Sikri shifted base to Mumbai in the late 1970s and made her debut in films with Amrit Nahata's political satire 'Kissa Kursi Ka' (1978) and followed it up with critically-acclaimed features 'Tamas' (1986) by Govind Nihalani, for which she won her first 'National Film Award' and Saeed Akhtar Mirza's 'Salim Langde Pe Mat Ro' in 1989. The same year, she was awarded the 'Sangeet Natak Akademi Award'.

The director-actor duo further collaborated on the musical 'Sardari Begum' (1996) and 'Zubeidaa' (2001).

In cinema, Sikri worked with celebrated filmmakers like Rituparno Ghosh, Aparna Sen, Mani Kaul and others.

The actor made her foray into television in the 1990s with 'Sanjha Chula' and went on to feature in popular shows like 'Kabhie Kabhie', 'Just Mohabbat', 'CID', 'Banegi Apni Baat' and 'Balika Vadhu'.

Her portrayal of strict matriarch Kalyani Devi Dharamveer Singh as known as dadisa in 'Balika Vadhu' made her popular among the younger generation of film as well as television directors.

She played the part of dadi in other soap operas like 'Pardes Mein Hai Mera Dil' and 'Ek Tha Raja Ek Thi Rani'.

Sikri's back-to-back impressive turns as the grandmother on TV helped her land 2018 feature 'Badhaai Ho'. The film, starring Neena Gupta, Gajraj Rao and Ayushmann Khurrana in lead roles was one of the biggest hits of the year and brought Sikri her third 'National Film Award'.

Sikri was last seen in Netflix's anthology 'Ghost Stories' (2020) in the story directed by Zoya Akhtar.

The actor was married to Hemant Rege till his death in 2009. She is survived by her son Rahul Sikri.

Celebrities paid tribute to the late actor and remembered her as one of the greatest talents of the entertainment industry.

"I'm very sorry to hear about her demise. She was an extremely successful actor in theatre and I had seen her plays in Delhi and that is how I was introduced to her work. She gave an outstanding performance in three of my films," said director Shyam Benegal.

He added, "She was such a brilliant actor that whatever role you gave her she would own it. She played both sympathetic and non-sympathetic roles. She was a top-class and highly competent actor."

"I got this very sad news that Surekha Sikri is no more. I want to share my grief with you all. I feel so sad that she is no more," Neena Gupta said in a video message on 'Instagram'.

She added, "I remember when I was a student in the NSD and how we would sneak in and watch her act. I think I want to become an actress like her. This was many years ago."

"I would just keep watching her when she would do her scenes. There was so much I learned (observing her) and there was so much more to learn as well. What commitment she had," she said while adding that Sikri kept giving her cues till she got a perfect shot.

Manoj Bajpayee, who worked with Sikri in 'Zubeidaa' said, "Very sad news! One of the greatest talents Surekha Sikari ji passed away leaving behind so many great performances in theatre and cinema! She was a treat to watch on stage. I cannot forget some of those memories of her act in theatre. Great craft and a graceful person! RIP."

Filmmaker Zoya Akhtar, Janhvi Kapoor and Vijay Varma, who worked with Sikri on her last project 'Ghost Stories', paid homage to the actor on 'Instagram'.

"It was an honor to work with you," said Zoya.

"What a force of nature she was. She was a true artist. It is a big loss to the cinema. Heartbroken," Varma said.

Actor-producer Pooja Bhatt said, "She was a force of nature if ever there was one. Hence I would not say rest in peace but rage in peace Surekha ji as you did, during your time on earth!"

"There is no one like her. What an extraordinary woman. An artist par excellence. Those eyes and that smile. Her craft will inspire generations of performers. Was lucky to have the chance to witness her magic in person," tweeted Dia Mirza.

"She was an institution herself. She was a legend a natural actor. She was full of life and positivity. She lived life on her terms and had a sense of humour. I learned a lot from her in those five years. We both shared an extremely close bond," shared TV actor Shashank Vyas, who worked alongside Sikri in the TV show 'Balika Vadhu'.