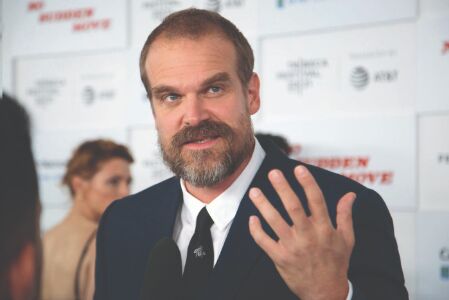 Stranger Things' star David Harbour has credited his role in the show for inspiring him in real life life, especially his character Jim Hopper's story arc of becoming a father figure to Millie Bobby Brown's Eleven.

Reflecting on his family life with wife Lily Allen and her two daughters Marnie Rose, 8, and Ethel Mary, 9 - whom the singer shares with ex Sam Cooper - Harbour said that "TV definitely helped me in my life", reported 'People magazine'.

"I'm very much a New York sort of city rat. I liked my freedom, my independence. And then it was really this part that did change a lot of that perspective. The show sort of opened my heart in a lot of different ways, and one of the ways that it did was it started to make me realize how thin my existence was without a family," the 46-year-old actor said on 'That Scene with Dan Patrick' podcast on Amazon Music.

Harbour said his character "maturing into a father" on-screen was also "something clearly my subconscious was crying out to do."

"As I began to explore this role, the role allowed me to do that in my real life," he said.