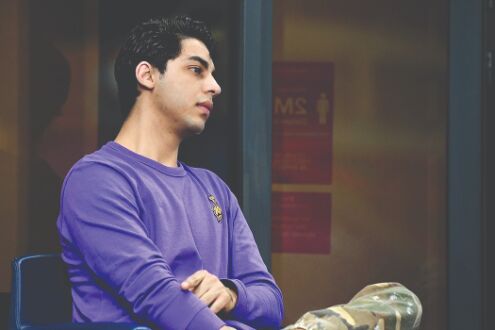 Spending 25 days in jail has reportedly had adverse effects on Aryan Khan.

According to news reports, Shah Rukh Khan and Gauri Khan's son has been left 'traumatised' by the whole incident. The star-kid, who previously had a buzzing social life, partying it up with friends, has now reportedly become very reserved.

A close friend of the family told a news portal that Aryan keeps to himself after his bail and spends most of his time in his room. Since getting bail on October 30, Aryan has had no interest in meeting his friends. SRK, Gauri and the rest of the family are also reportedly giving him his time and space to get better.

It has also been reported that his concerned parents are doing all they can to make sure they are there for him every step of the way. It was one of the reasons why SRK chose to ditch his birthday celebrations and pack up and head to Alibaug to spend some quality time together as a family.

With film schedules beckoning him back to the sets, Shah Rukh is also weighing in his options to hire a personal bodyguard for his son. The doting father is keen on doing everything in his power to keep his son safe and while his trusted bodyguard is currently accompanying Aryan for his meetings with the NCB, he will soon have to accompany Shah Rukh on his international shooting schedules.

Aryan is expected to appear before the NCB again on November 12 to mark his attendance. The star-kid was called in by the NCB's SIT officers for their investigations into the drugs case and the alleged 'extortion bid' in his case. Aryan was reportedly summoned on November 7 but called in sick as he was down with a fever.

Meanwhile, the SIT has also summoned SRK's manager Pooja Dadlani to record her statement in their investigations. She too skipped the summons citing 'health reasons'.