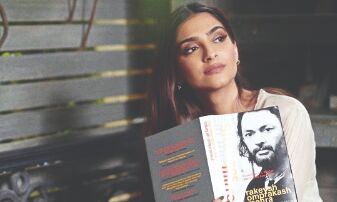 Rakeysh Omprakash Mehra is a name associated with some of the finest pieces of Bollywood's craft in the past few years. The multi-faceted writer-director, who has given the industry films like 'Rang De Basanti', 'Delhi 6', 'Bhaag Milkha Bhaag' and many others, is now gearing up for the launch of his autobiography 'The Stranger in The Mirror', the cover of which has now been unveiled by Sonam Kapoor.

The autobiography's foreword has been given by A R Rahman, with whom the director has collaborated in two films 'Rang De Basnati' and 'Delhi 6'.

The afterword of the book has been given by Aamir Khan, with whom he worked in the super-hit film 'Rang De Basnati'.

Sonam and Rakeysh had collaborated for the critically acclaimed film 'Delhi 6' and 'Bhaag Milkha Bhaag'. She took to her social media handle to unveil the director's cover of the book.

The caption of her post read, "Mehra is a great mentor for any actor in the industry. To see his zeal and vision translate onto the screen is truly magical! He is now sharing his vision and journey with everyone through 'The Stranger in the Mirror'. Here is the first look at Rakeysh Omprakash Mehra's autobiography. It is releasing on July 27, 2021."