'Smaller screens not an alternative to theaters' 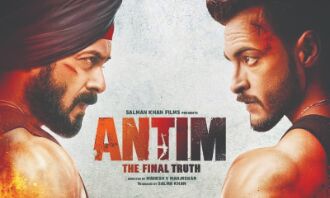 Salman Khan, who is awaiting the theatrical release of his film 'Antim: The Final Truth', said nothing can replace the joy of watching a movie on the big screen.

The action drama is billed as a 'gripping tale of two powerful men' with opposite ideologies - one a cop and the other a gangster, played by Khan and Aayush Sharma, respectively.

When asked about the change in the viewing pattern of the audience amid the Coronavirus lockdown, Khan said people have slowly started coming back to theatres.

"To watch movies on laptop, iPad or on a small phone, there is not much joy as compared to watching it with everyone on the big screen in a theatre. If you think small phones are an alternative to cinema halls, then it is not true," the 55-year-old star told reporters at the trailer launch of 'Antim'.

Khan, whose last release 'Radhe: Your Most Wanted Bhai' arrived on 'Zee Plex' through the streamer 'ZEE5' in India, said the film exhibition industry will eventually bounce back.

"Whatever opening would have been there earlier at the box office (before COVID-19) of a movie it should be 50 percent less now. The industry

will come back, the alternate seating arrangements will

also go away. Mostly everyone has been vaccinated now but we all still must be careful," he added.