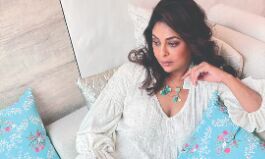 Shefali Shah, in a recent interaction, revealed how it took a long time for her to be recognised in the industry. While doing so, she also highlighted the issue of age discrimination in the showbiz world by revealing she played Akshay Kumar's mother at 28.

In a recent interview with a leading news agency, Shefali explained that the filmmakers took forever to recognise her acting prowess. According to her, she was close to retiring before she was roped into essay strong roles in Bollywood.

Further highlighting the issue of age

discrimination, she detailed that she played aged roles very early in her career. However, after a while, work reportedly began

driving her crazy. Post which, Shefali preferred taking a hiatus and sitting at home instead.

"Filmmakers took forever! I was almost on retirement. I played age very early. I played Akshay Kumar's mother when I was around 28. I got 'Hasratein' when I was 20 and played a 30-35-year-old in it," she revealed.

While explaining why she passed on projects, Shefali opined, "After a point, I decided if I'm not getting the work that drives me crazy, I will sit at home. I reached this

peace that such kind of work would not come every day. And the few films I did raise that bar. I have said no to work even if it meant sitting at home for two years, not doing anything."

On the professional front, in the first week of August, Shefali wrapped up the shooting of 'Darlings' alongside Alia Bhatt.

Apart from 'Darlings', Shah also has 'Doctor G' and Vidya Balan-starrer 'Jalsa' in the pipeline.