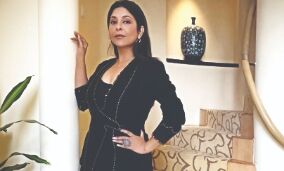 Shefali Shah, the actor who has always left us smitten by her performances across platforms, has something different and beautiful to offer with 'Happy Birthday Mummyji' - a story written and directed by her. Shefali along with Sunshine Pictures Pvt. Ltd. recently released the film's first poster. The short film is presented by Royal Stag Barrel Select Large Short Films and will be out soon.

Speaking about the film, she says, "It's a story of us, of everyone who is recognised by their relationships, family, home… A choice we happily make. But at some point or the other, we all have felt the strong need to let go of all responsibilities. The COVID-led lockdown rubbed into our faces the strong sense of isolation, but what if there was a different take on it."

The story of 'Happy Birthday Mummyji' is an emotional roller coaster, which every woman will relate to.

Shefali's first directorial was 'Someday'. The film was screened at the 18th Indian Film Festival Stuttgart, Germany. It is a story of two women, united by the umbilical cord and separated by a door. In the film, the two characters share conversations from the past and the future with no present to tie them. Some real, some imaginary. Their togetherness oscillates between what was, what can't be, and what may just be someday.

The much-talked about film was screened at the 18th Indian Film Festival Stuttgart. Besides honing her talent as a director, Shefali recently showed her acting prowess once again in her latest outings like 'Ajeeb Dastaans'.

She will soon be seen in 'Darlings' alongside Alia Bhatt and Vijay Verma.