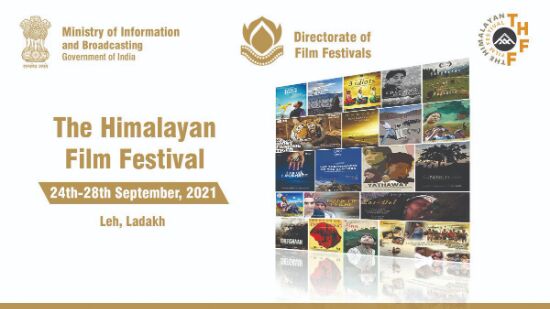 Ladakhi filmmakers Stenzin Tankong and Stanzin Gurmet and three short films were felicitated at the inaugural edition of the 'Himalayan Film Festival', with Lieutenant Governor R K Mathur strongly pitching for the continuance of the movie gala as an annual event to showcase the talent of the Himalayan region.

The five-day event concluded at Sindhu Sanskriti Kendra in Leh, Ladakh on September 29.

Lieutenant Governor of Ladakh presided over the function as the chief guest. Secretary, Ministry of Information and Broadcasting (MIB) and Government of India (GoI), Apurva Chandra and renowned Filmmaker Rakyesh Ompraksah Mehra were the special guests, an official spokesman said.

(Meiteilon/Manipur), 'Go for Organic' and 'Homework and Godliness', which were awarded the cash prize of Rs 3.5 lakh each.

The festival concluded with the screening of the internationally acclaimed film 'Shepherdess of the Glaciers' by renowned Ladakhi filmmaker Stanzin Dorjai.

Speaking at the closing function, Mathur expressed happiness over the success of the festival and said it should continue as an annual event.

For better training of the local film aspirants, the lieutenant governor said the administration is working towards tying up with the 'Film and Television Institute of India' (FTII), Pune to provide courses in Ladakh.

"In addition to creativity, technology has an important role to play in the contemporary film industry and one must become a professional," he said.

While commending the youth of Ladakh for their talent and creativity, Mathur asserted that they must aim to win the world on their terms and rooted in their own culture.

Expressing his fondness for the Ladakhi folktale 'Gyalam-Kesar', the lieutenant governor said he hopes it is adapted into a motion picture someday.

Chandra, Secretary, I&B, GoI, appreciated the maiden attempt by the administration of Ladakh in successfully conducting the first edition of the 'Himalayan Film Festival'. He also suggested taking up the idea of organising a national-level festival on short films to encourage aspiring filmmakers from smaller regions like Ladakh.

Filmmaker Mehra, known for 'Bhaag Milkha Bhaag' and 'Rang De Basanti', suggested making the mobile gala an international affair in the future. He proposed to invite interns from Ladakh to his production house, adding he is willing to spend a month in the union territory every year to impart skill training to aspiring filmmakers.

The festival, which ran from September 24 to September 28, received 100 entries from Himalayan states and UTs.