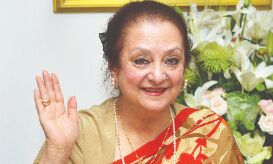 Late Dilip Kumar's wife Saira Banu was hospitalised after she complained of issues related to blood pressure three days ago. The veteran actor was reportedly shifted to the ICU.

"Actor Saira Banu, the wife of late veteran actor Dilip Kumar, was admitted to Hinduja Hospital in Khar, Mumbai after she complained of issues related to blood pressure three days ago. She has been shifted to the ICU ward today," read the statement of a leading news agency.

Saira Banu recently lost her husband Dilip Kumar. The legendary actor passed away at the age of 98 due to age-related issues. Saira and Dilip Kumar were married for 54 glorious years and their love story will continue to inspire generations to come.

During all these years, Saira has been a backbone to Dilip Sahab. She not only took complete care of him during his bed-ridden days but also kept his fans on social media updated about him.

Saira Banu, who has always been a self-confessed fan of Dilip, had reportedly said that many women wanted to marry Dilip, but he chose her every time. The actor, who ditched her acting career to be a homemaker in 1976, said that she wanted to be Dilip's wife ever since she was a teenager and once she made up her mind, nothing could deter her.