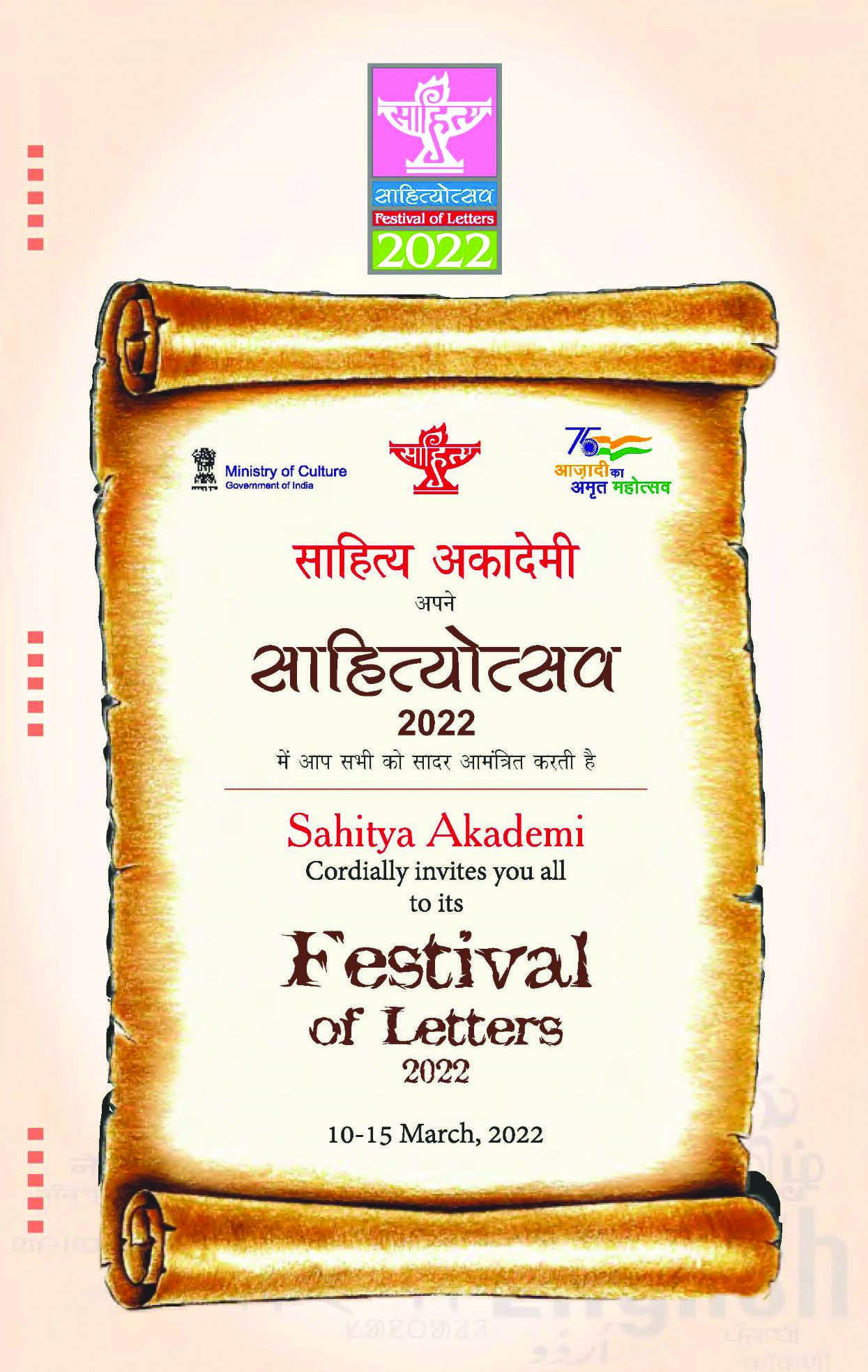 Sahityotsav, the 'Festival of Letters' of Sahitya Akademi, India's most inclusive literature festival will be held from March 10 to March 15, 2022, in New Delhi.

'Festival of Letters 2022' will be a part of the celebrations to commemorate the 75th anniversary of India's Independence. The events will have one or the other theme on Independence or Independence movement. At the festival, there will be a special corner to display the books related to India's Freedom Movement and other materials relevant to the 'Azadi Ka Amrit Mahotsav'.

The festival's events will take place at the Rabindra Bhawan Lawns, Kamani Auditorium and the Akademi Auditorium.

The festival commences with the inauguration of the Akademi Exhibition by Arjun Ram Meghwal, Minister of State for Culture on March 10. The exhibition will showcase Akademi's achievements and seminal events held in the previous year.

On March 11, 'Tribal Writers' Meet' will be held with the representation of 24 tribal languages. The prestigious 'Sahitya Akademi Awards' will be presented to the 24 Award winners. Bhalchandra Nemade, eminent Marathi poet and critic will be the Chief Guest at the award presentation ceremony.

All the 24 Award winners will assemble for the 'Writers' Meet' on March 12 to share the creative process they underwent in writing their award-winning titles. Award-winners in Assamese, Bengali, Gujarati, Hindi, Tamil and Telugu will be in conversation with eminent scholars in those languages in the 'Face to Face' programme.

On the same day, a symposium on 'Evolution of Plays in India since 1947' will be

on Indian Independence Movement' will start on

March 13. 42 eminent scholars from all over the country will participate and present papers on various aspects of the impact of literature on the Indian independence movement.

On the same day, a symposium on 'Fantasy and Science Fiction in Indian Languages since 1947' will be inaugurated by eminent writer Devendra Mewari. Also, Dr Chandrashekhar Kambar will confer 'Sahitya Akademi Fellowship', the highest literary honour in India, on Jagadguru Ramanandacharya Swami Rambhadracharya.

A panel discussion on 'Media and Literature' will be organised on March 14. Venudhar Reddy, Director General, 'All India Radio' will inaugurate.

On the same day, the President of Sahitya Akademi will preside and Dr Vinod Joshi, eminent Gujarati poet will be the Guest of Honour at the 'Transgender Poets Meet'. Dr Shashi Tharoor, eminent English author and scholar will deliver the prestigious 'Samvatsar Lecture'.

Meet' will commence on March 15.

On the same day, Mamang Dai, eminent English writer, will inaugurate and Anita Agnihotri, eminent Bengali poet and writer will deliver a keynote address at the symposium on 'Literature and Women Empowerment'.

Akademi's book exhibition will be held on all the days of the festival from 10 am to 7 pm and there will be a special discount on select publications.