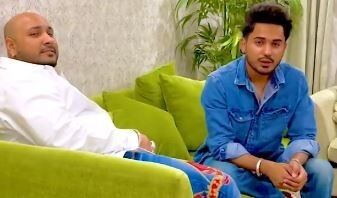 The fastest rising star Romaana has gained major recognition with his voice and charm. After embarking on his solo career with his first single, 'Goriyaan Goriyaan', the singer garnered a massive fan base. Romana's first EP, 'Meherbaniaan', was released recently by Desi Melodies and the album includes four songs created, composed and sung by him. The EP is receiving a lot of attention from the audience as the views are increasing quickly.

The young artiste recently made an Instagram reel with the singer Bpraak, in which they can be seen lip syncing and enjoying the song.

Romaana has been a part of record-breaking songs by BPraak including 'Filhall'. Moreover, he wrote the first stanza for B-Praak's song "Baarish Ki Jaaye", which features Nawazuddin Siddiqui. Together, they appear to share a close bond as members of Desi Melodies. Bpraak recently opened up about his thoughts on Romaana and stated, "Romaana is only getting started and 'Goriyaan Goriyaan' was simply the trailer of what this young artist is capable of. Every song on the 'Mehrbaniaan' EP is a delight to listen to and since all of them are written, composed as well as performed by him, it really shows how talented Romaana is! I have heard his other projects that are yet to come out, I can guarantee that he will shine on and become the face of Punjabi pop very soon!".

Coming back to the EP, The first song on the EP, 'Mehrbaniaan,' tells a story of a helpless bride who has given up on her toxic lover. As the protagonist longs for his partner, 'Khair Allah Khair' embodies that longing; The song 'Kithe Reh Gaye' is about the love of his life and his desire to win it back, and for 'Mann Dolje' Romaana uses the canvas to praise his lover's eyes and how captivating they are by using alluring metaphors.

Romaana embarked on the journey as a solo artist 'Goriyaan Goriyaan' under the production of Desi Melodies. Written and composed by Jaani, along with music by B-Praak, it currently stands at upwards of 28 million views on YouTube.