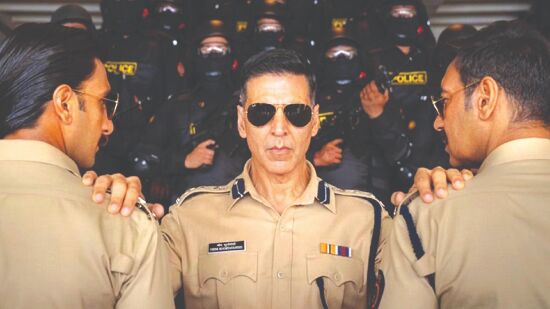 Filmmaker Rohit Shetty responded to the criticism of Muslim villains in 'Sooryavanshi' and asked why his Hindu villains did not create an issue earlier.

In a new interview, Rohit said that while making the film, there was no specific thought behind making villains out of a certain caste or religion. Starring Akshay Kumar in the titular role, 'Sooryavanshi' also featured Ranveer Singh and Ajay Devgn in guest appearances.

In an interview with a news portal, Rohit Shetty was asked about 'bad Muslim-good Muslim' narrative in 'Sooryavanshi', to which he responded: "If I ask you one question - Jaykant Shikre (the antagonist in 'Singham', essayed by Prakash Raj) was a Hindu, then came in this universe (Rohit Shetty's cop universe which includes 'Singham', 'Singham Returns' and 'Simmba'), a Hindu Godman who was the villain. In 'Simmba', Durva Yashwant Ranade (played by Sonu Sood) was a Maharashtrian. In these three films, negative forces were Hindu. Why was not that a problem?"

He added, "If there is a terrorist who is from Pakistan, what caste will he be? We, the creators of 'Sooryavanshi', are not talking about caste."

"There is a thought with which a film is made. We never thought that way. Why is it being discussed? If we have a sleeper cell, then what caste will a sleeper cell be? Why is a bad and good person being linked to caste, when we as makers never thought about it? If it was wrong, everyone would have talked about it. A few people are talking and it is their point of view which they need to change, not us," he added.