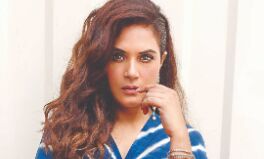 ctor Richa Chadha and Ali Fazal recently made headlines with their creative Halloween look. And now, in an interview, Richa made some bold statements about Bollywood celebrities who try to make themselves relevant by participating in film industry-related debates on news channels. For her, these people have 'no credibility' and are 'very opportunistic'.

"As far as polarisation in the film industry goes, I don't know but I refuse to take seriously people who have zero credibility. I don't want to name them here and give them more importance because that's actually what they thrive on. But the fact is they have no credibility. They are the rejects of the system. They are what my friend Mini Mathur calls the 'khurchans (scrapings from the bottom of the pan) of Bollywood,'" she told Film Companion.

The actor further mentioned that the ones on news channels are 'not insiders' rather are the ones who stand outside and bark at others. Richa said, "If they are going to gather together, appear on TV debates, froth at the mouth and try to be relevant, they should not be taken seriously. I mean they are not insiders. They don't know. They are the ones who stand outside a room and bark at you for not being included. They are holding grudges from 1952. That polarisation I would not be able to speak for because I think it's very opportunistic."

Richa Chadha was joined by fiancé Ali Fazal in the interview, and they got candid about their wedding plans.

She said that as soon as they talk about it, the Covid-19 wave disrupts all their plans.