Returning to stage amid pandemic 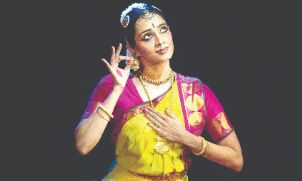 The world of the arts can only flourish fully if there are patrons and an audience. An audience can only forgather if the performance is facilitated by a patron. Sadly, even though other activities have resumed to normalcy now, live concerts still remain a rarity, in Delhi and other cities.

As such, it was a real pleasure to see the Sanskriti Madhobi Chatterji Memorial Fellowship dance performance recently. This was held in an unlikely venue, an art gallery (since auditoriums, sadly have still not been given government permission to open), with impeccable socially distant seating arrangements. This year's awardee was Chennai based Lakshmi Parthasarathy Athreya, a Sangeet Natak Akademi Yuva awardee, disciple of Padmashri Chitra Visweswaran. In her words, "This fellowship is great positive energy, coming as it does after this strange bleak pandemic period, to pull out of cold storage projects put on hold. My dream project, a collaboration with dhrupad, went into hibernation - I want to revive that now."

Purobi Mukharji has been a music lover for decades; for more than 10 years she has annually awarded a fellowship to a worthy musician or dancer in the name of her mother, Madhobi Chatterji, herself an artist. As Purobi put it, "One cannot simply enjoy the arts; as lovers of the arts, its our duty to support the artists too." Carefully scanning worthies from all over India, earlier recipients have included Pune based vocalist Sawani Shende, Debashish Dey from Banaras, Kolkata based sarodiya parthosarathy and vocalist Shaukat Hussain Khan from Ahmedabad.

For Lakshmi; the opportunity to dance again in Delhi was after a gap of 6 years. She excitedly shared, "To be considered worthy of the fellowship is indeed a pat on the back!" Her careful compilations of diverse pieces, showing her flexibility and maturity as a dancer, were most enjoyable. Starting with a traditional Ganapati invocation, Lakshmi also danced a conventional "padam"; confining herself to a traditional dance repertoire, albeit edited, given the restrictions of time. (the performance was under 2 hours). She herself choreographed the "varnam" in Raga Thodi.

She ended with an interesting piece set to Raga Brindavana Sarang, composition by Vallabhacharya (Madhuraashtakam) where the "thillana" was craftily woven into the dance. This piece was choreographed by her Guru Chitra Visweswaran, and the music was by Visweswaran ji. The devotion in the air was palpable. The finale, a "mangalam", performed traditionally to invoke auspiciousness, brought to an end to a most satisfying evening.

Dancing to recorded music turned into an asset as the music included full fledged, top class accompaniment of veena (Kumari Anjani Srinivasan) flute (Sruti Sagar) violin (Ananthakrishnan), which would not have been possible in a live performance, being outstation, with the best accompanyists being in Chennai. The recording quality, expectedly, was superb too. Lakshmi's minimal makeup and simple attire was refreshingly welcome; heavy embellishments would have perhaps been out of place in the cosy space of the art gallery.

The audience, which had taken the trouble to come to the unusual, unconventional venue seemed to have really enjoyed the experience of a live concert after so long. Noted author, and music lover Asharani Mathur put it eloquently, "Nothing can match the vibe of a live concert. The inspiration and anticipation of an attentive audience brings out something in the artiste; there is a response which transcends the much practised. Literally, one call it an electric connection. During Lakshmi's dance, I found her out of herself during the "Madhuraashtakam", it was really divine."

One hopes the hiatus in live performances will now end.

on music, musicians and