Rani and Saif are a textbook: Siddhant 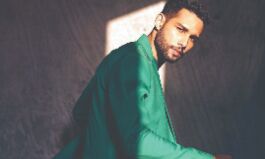 Siddhant Chaturvedi is grinning ear to ear and rightfully so. After all his upcoming movie 'Bunty Aur Babli 2' is creating a massive buzz. Also starring Rani Mukerji, Saif Ali Khan and Sharvari in the lead, the movie happens to be the sequel of the much talked about 'Bunty Aur Babli'. Ahead of the movie's release, Siddhant got candid about collaborating with Rani and Saif for the first time and revealed that he got to learn a lot from them.

"Rani ma'am and Saif sir are a textbook. The first time we worked with him, we could not believe that we were sharing the same frame. We got to learn a lot. We are against them in the film, but in reality, we learned a lot," he said.

Siddhant became a household name with his stint as MC Sher in Ranveer Singh's 'Gully Boy'. Talking about it, he said, "MC Sher had an impact that all wanted me to play similarly. I had plans about how this film would change the image and show a different side of me as an actor. The audience will laugh, enjoy and have fun. These have been intense times and people have consumed a lot of content on OTT, which also gave rise to new talent. But the big screen has different magic."

Siddhant is excited to play the lead in 'Bunty Aur Babli 2' and believed that his time has finally arrived.

"I waited two years for the release of 'Bunty Aur Babli 2'. Apna time ayega, apna time ayega. Ab finally aa gaya hai. The audience will get to see me in multiple avatars," he added.

'Bunty Aur Babli 2' is slated to release on November 19 this year.