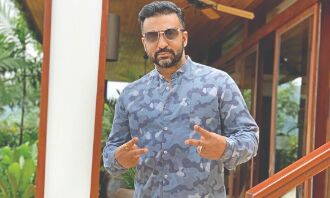 On July 27, a Mumbai court remanded businessman Raj Kundra in 14-day judicial custody in the case related to the alleged creation of pornographic films and publishing them through some apps.

Kundra, the husband of actor Shilpa Shetty was arrested on July 19 by the Mumbai police crime branch under sections of the Indian Penal Code and the Information Technology Act.

Kundra moved the court for bail and his plea was kept for hearing on July 28.

Further investigation in the Raj Kundra adult film racket has led to murkier details emerging. According to a news report, the first charge sheet in the case was filed and Mumbai Police detailed the financial targets that were set by Raj and his company 'Bollyfame Media Limited'.

The charge sheet contains a presentation that projected gross revenue of Rs 146 crore and a net profit of around Rs 34 crore for the year 2023-24, the report stated. It also included the revenue and net profit numbers for the year 2021-22 and 2022-23.

"The documents were seized from Kamat. Kundra was not arrested when we filed the first charge sheet. As the investigation progresses, we will get more clarity about 'Bollyfame' and the same will be covered in a supplementary charge sheet," stated a crime branch official.

After 'HotShot' was banned, the content was shifted to 'Bollyfame', the crime branch stated. Server, several files and documents were seized over the weekend from Kundra's office and will probably give cops more clarity on the case.

According to another report, Raj was anticipating arrest and thus threw away his old phone. The police busting the adult film racket in February in Mumbai led him to be on alert and get rid of his old phone in March.

"When crime branch officials asked him about his old phone, he told them he threw it away. Police believe that the old phone contains many important pieces of evidence and is looking for it," the crime branch stated.

Previously, it was reported that four employees from Kundra's 'Viaan Industries' were likely to turn key-witnesses in the adult film racket case. A report suggested that these four employees were also asked to delete obscene clips from 'Hotshots'.

On the other hand, Marathi actor Umesh Kamat has decide to take legal action. He said, "I, Umesh Kamat an actor by profession, have been unnecessarily dragged in the controversy due to the lack of due diligence by news channels/media platforms."

"My photographs, which are available in the public domain, are being misused by representing me as the accused involved in the case. Since the concerned news channels/ media platforms have failed to follow the basic protocol of running a fact check on the information that is being broadcast and used in their news pieces, I have decided to pursue appropriate legal action against all the responsible entities," he added.