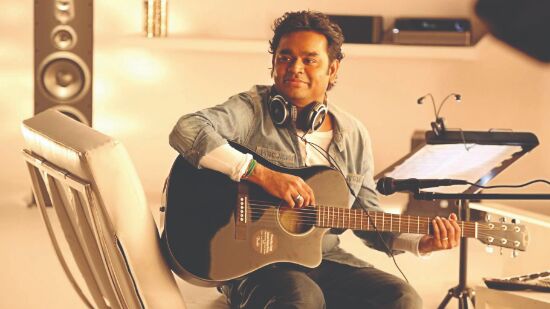 AR Rahman has made Indians proud yet again as his score for the Kriti Sanon-starrer 'Mimi' gets submitted for the '64th Grammy Awards'.

Rahman recently took to 'Twitter' to share this wonderful news with netizens and fans. He wrote, "I am so excited to share that my soundtrack for visual media 'Mimi' has been submitted to the '64th Grammy Awards' for Your Consideration. Here is a link. Thank you!"

The lead star of the film, Kriti Sanon, congratulated him for this achievement. Sharing his tweet, she wrote, "Wow! Congratulations Sir!"

AR Rahman has been the recipient of several prestigious national and international accolades in the past. He has been awarded two 'Academy Awards', two 'Grammy Awards', a 'BAFTA Award' and a 'Golden Globe Award'. Apart from this, he has won several Indian accolades as well.

Talking about the soundtrack of 'Mimi', Rahman and Shreya Ghoshal's 'Param Sundari' has been a big hit among the masses in recent times. The songs of the film have been penned by lyricist Amitabh Bhattacharya. Directed by Laxman Utekar, 'Mimi' starred Kriti Sanon, Pankaj Tripathi, Sai Tamhankar, Manoj Pahwa, Supriya Pathak, Evelyn Edwards, Aidan Whytock and Jacob Smith.

The film narrates the story of a young woman called Mimi who aspires to be a Bollywood actor. She decides to be a surrogate for a white couple so she can live her dreams with the money made in the process.

But when the couple flees, Mimi is left to fend for the child.