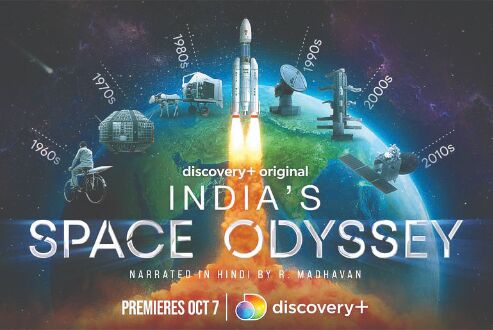 The documentary, which premiered on October 7, has been narrated by actor R Madhavan in Hindi, the streaming service said in a statement.

The experts speak about their challenging yet wholesome journey working in India's Space Programme and through the documentary, they will highlight the country's most revolutionising space developments like 'Chandraayan' and 'Mangalyaan' missions.

Madhavan said he is honoured to have narrated for 'India's Space Odyssey' as he believes the documentary will inspire future generations.

"Curiosity has brought humans to where we are today and it will continue to do so. I thank 'Discovery India' for this wonderful learning opportunity. I feel honoured to have lent my voice to a project that could inspire future generations to embark on their quest to explore space," the 51-year-old actor said.

Sivan, the Chairman of the Indian Space Research Organisation (ISRO), said they are delighted to collaborate with 'Discovery' for the documentary.

"The Indian Space programme, since its inception, has achieved significant feats, thanks to the contributions of all the people who have worked alongside the programme. We are delighted that a platform like 'Discovery' has been taking these initiatives to the people in an attempt to encourage and inspire them," Sivan said.

the audience an enriching and inspiring experience.