'Prep is driving everybody ragged' 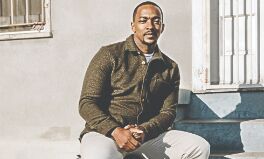 With a memorable debut as the new Captain America in The Falcon and the Winter Soldier's finale, Hollywood actor Anthony Mackie increased curiosity levels within 'Marvel Cinematic Universe' fans when it comes to his beloved character Sam Wilson's future.

The pretty obvious answer would be 'Captain America 4', which is in the works with the popular Disney+ series' show-runner and staff writer Malcolm Spellman and Dalan Musson co-writing the script.

However, Anthony continues to be vague when asked about Captain America's upcoming fourth installment. During a recent appearance on Deadline's 'The Actor's Side' with Pete Hammond, Mackie shifted the focus from an update on 'Captain America 4' to Black Panther: Wakanda Forever's progress instead.

"I do not know. The show came out and for the last episode, we had a 'Zoom' party with everybody. And that was it. Like I have not heard from anybody since, so 'Marvel Studios' have a million things going on," the 42-year-old actor admitted via 'ComicBook'.

He added, "I know the prep for 'Black Panther 2' is driving everybody ragged, so I do not know. I'm interested to see where it is going."

Given Chadwick Boseman's heartbreaking passing, MCU fans are intrigued to know as to how director Ryan Coogler will continue the story forward in 'Black Panther 2' as it was confirmed that neither recasting T'Challa's role or using CGI to recreate the Oscar-nominated

actor will be implemented in the sequel.