Pratik to explore the grey side of Raavan

Pratik Gandhi’s film ‘Bhavai’ was initially named ‘Raavan Leela’, but the makers decided to change the name keeping sentiments of a section of viewers 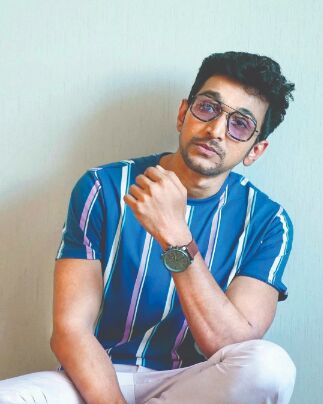 Actor Pratik Gandhi hopes the audience is open to the moral dilemma at the centre of his upcoming film 'Bhavai' because what is right or wrong changes with time.

Gandhi, who shot to fame following his acclaimed performance as notorious stockbroker Harshad Mehta in last year's hit SonyLIV series 'Scam 1992', said information explosion through the Internet adds to the complexities of India as a country.

'Bhavai' is a film about two people who work in a Ram Leela presentation and how it affects their personal life off stage. Its title initially was 'Raavan Leela (Bhavai)' but was changed to respect the sentiments of a section of viewers.

"It's very easy to colour the thoughts of people in the age of social media. If you are being bombarded with some lies constantly, you tend to believe it's true. That is what is happening all across the world."

"There is so much diversity in India in terms of religion, schools of thought, everything... that makes it easier to colour people using these things. The Internet is cheap and people have a lot of spare time; it is a big evil that we are fighting. These are such complex times that no one has any answer to this," the 41-year-old actor said in an interview.

In 'Bhavai', Gandhi plays Rajaram Joshi, a stage artist who essays the role of Raavan in a Ram Leela, the dramatic folk re-enactment of the Ramayana.

Traditionally, a Ram Leela uses song-and-dance sequences to showcase the legendary war between Good and Evil, symbolised by Lord Ram and Raavan.

The actor said that while he is not justifying the actions of Raavan that led to his eventual fall, he is open to viewing the character as grey.

"When Valmiki wrote Ramayana he could have described him as a 'black' character or talked about only his shortcomings, but he didn't. When this hasn't happened right from the beginning, who are we to claim what is right and what is wrong? Why was Raavan called a 'prakaand pandit' (learned scholar) or a Shiva devotee then? Perhaps he also wanted the people to understand the greyness and didn't want to paint him just as a demon," he said.

There are several interpretations of the epic Ramayana across India, Sri Lanka, Indonesia and Malaysia, and it is interesting how people belonging to these different countries have "tweaked the story a lot and believe in their versions," Gandhi pointed out.

"Even if I look at it as a metaphor, both Ram and Raavan exist in each one of us. It's all about one's mindset. All the goodness is Ram, all evil is Raavan. But we are living in a world which is grey. So there is a constant battle between Ram and Raavan that goes on inside us.

"That is a moral dilemma. What is right and what is wrong keeps changing according to time... Having said that, I'm not trying to justify what Raavan did. But what I'm saying is let's be open to interpretation."

Hailing from a religious Gujarati Vaishnav family, Surat-born Gandhi said while he has grown up with 'pooja-paath' all around him, he considers himself a "spiritual person".

"As an engineer and a student of science too I believe that energy can neither be created nor destroyed. If that is the case, then energy is universal," he added.

Calling 'Bhavai' an "important film of his life", Gandhi revealed director Hardik Gajjar offered the role to him even before 'Scam 1992' came to him. Had it not been for the coronavirus pandemic, the film would have been released way back.

Set against the backdrop of Bhavai, a popular folk theatre form from Gujarat, the movie marks his first Hindi feature film as a lead.

"I can't thank Hardik and the team enough for having me as a lead before 'Scam' when no one knew what was going to happen. We were going just by the script, the faith in each other," the actor, who is set to reunite with Gajjar in the horror comedy 'Atithi Bhooto Bhava', said.

Another reason he agreed to take up the musical drama feature, Gandhi said, was because 'Bhavai' was a perfect blend of his two loves - theatre and cinema.

"I get to perform on the stage in the film. Both these mediums are close to my heart. Theatre being

my first love, it was a treat for me to perform (the role of) Raavan on stage for the film. So it was a very interesting journey for me, I had a lot of fun.

"People often ask us to comment on the difference between acting on stage and in films. There is a certain change in the personality of the actor when they leave the stage because that's his real life," the actor, a known face in Gujarati theatre and films, said.

Gandhi said he constantly wanted to raise the bar for himself.

"I want to give the audience a new character every time so that they can think about something different every other time. I'm excited that people want to see more of me. We are in the business of experimentation. What is fun in this line is that you can truly enjoy the process when you experiment without pressure."

The actor reiterated that the film doesn't have anything that might hurt the religious sentiments of the public.

"Please watch the film first and then decide," he appealed.

Gandhi will next be seen in the Disney+ Hotstar series 'Six Suspects' and 'Dedh Bigha Zameen', a drama feature.