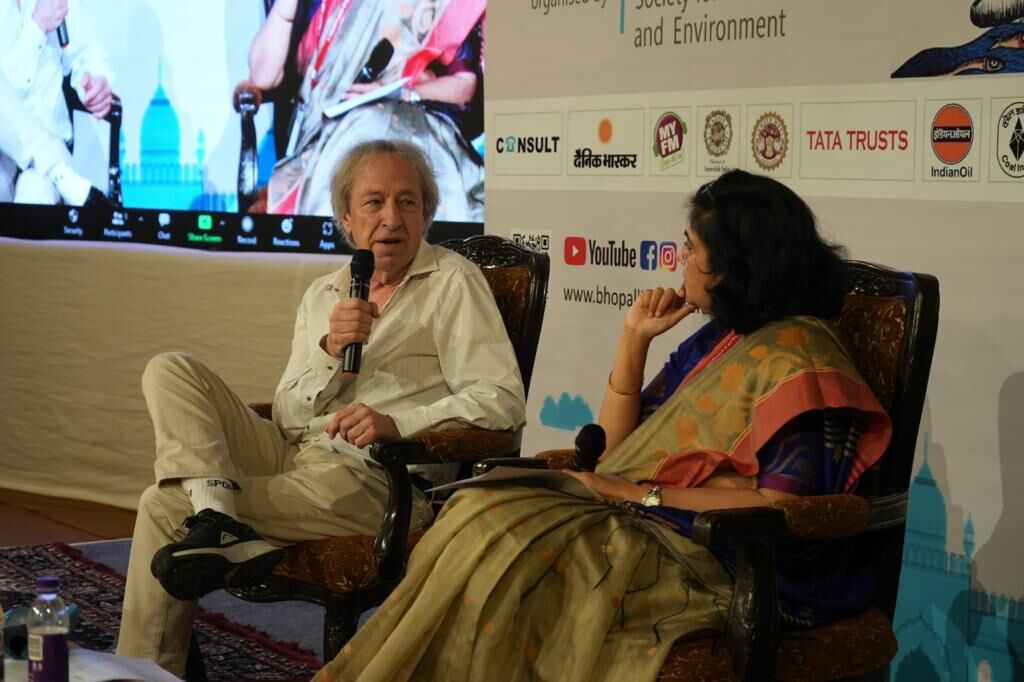 The session, titled 'Guilt, Love, Longevity, Ecology and more', was a freewheeling discussion that tried to capture many of the interesting and often controversial ideas that Pascal Bruckner has written about. A French philosopher, essayist and novelist, he has authored more than 40 books to date.

Beginning with the exploration of his 2022 book, 'The Friendship of the Mountain', the discussion of less than an hour left the audience wanting to hear more. Born in Austria and brought up in Switzerland, Pascal explained that he has always been enchanted with the mountains and snow. Climbing a mountain for him is a metaphor for life. We struggle, face challenges and finally reach a summit to come down eventually. Reaching a goal is what gives meaning and happiness in the journey of life.

This took the discussion to his ideas on happiness. His 2019 book, 'A Perpetual Euphoria', looks at the new happiness paradigm. As he explained, after WWII, the aim of life in the Western world moved from salvation to the pursuit of happiness. Gradually, being happy has become like a duty - a disease of sorts. He emphasised that happiness is a state of enchantment and wanting to be happy all the time is not a desirable pursuit. The place of grief and negativity in life is equally important.

Pascal Bruckner also delved into the challenges of longevity that he has looked at in his book 'A Brief Eternity'. Although it is an achievement of humanity to have increased life spans, there emerges the need for people to reinvent themselves in their older age. This also means a need to rethink retirement ages, which is being undertaken in France. He also highlighted the need for conversations between generations in a long-life scenario.

The last question due to paucity of time was about his views expressed in the book 'The Fanaticism of the Eco Apocalypse' on the issue of climate change. He wrote that climate change is being touted as a coming apocalypse, which is creating a culture of fear. This takes decision-making away from solvable problems. In his view, climate change and other issues need to be faced, but cloaking them in a shroud of fear is not correct as fear is a bad advisor and it does not lead to optimal outcomes.

A question was raised regarding his views on euthanasia. Pascal felt that it should remain a personal decision and there should remain a legislative vacuum on the issue.

To another question on different communities in France, he accepted that assimilation is a challenge and it is an ongoing effort.

The session brought to the balmy city of Bhopal a distinctly Western perspective on issues that impact all of us and was engaging and immersive.

The three-day Bhopal Literature Festival also gave away the 'Sushila Devi Award' for best fiction by a woman author and a cash award of Rs 2 lakh to Anukriti Upadhyay for her novel 'Kintsugi', which is about mending broken relationships.