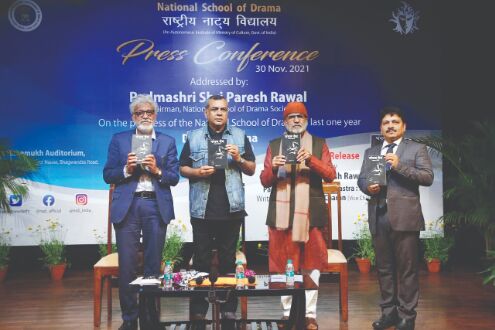 On November 30, 2021, a press conference was organised in Sammukh Sabhagar at the National School of Drama. The press conference was based on the progress made in the school during the last one year. Meanwhile, the book 'Pancham Veda - Natya Shastra: Naveen Drishti' written by Arjun Dev Charan was also released.

Rawal had assumed the responsibility of the chairman in September 2020 in the midst of the Corona pandemic and after that, keeping in mind the interests of the students, he initiated online classes through virtual medium so that no disruption may take place in the studies of the students. Along with this, Paresh Rawal has also taken forward the work of school redevelopment, which had been stalled for years, with personal interest and initiative. It was during the tenure of Rawal that the initiative of digitization of the school campus has also been taken and along with the smooth physical operation of classes in the school today, the process of admissions for the new session has also started. In order to start theater activities in the state of Jammu and Kashmir, which had been deprived of art activities, it was decided to start the Sanskar Rang Toli wing of the school in the state.

While addressing the press conference, the Acting Director of the National School of Drama, Dinesh Khanna, with expressing his gratitude towards the President, underlined the role of theater in society and reiterated his resolve to get the school recognize as an institution of national importance.

Khanna had assumed the responsibility of the Acting Director of the school on July 31, 2021 and after that, firstly, giving a meaningful impetus to the ambitious plan of Prime Minister 'Azadi Ka Amrit Mahotsav', finalized a three-day online drama festival in the school in August. Under this scheme, extending the role of the school more, through various theatre workshops across the country, involving the NSD Reportery, Sanskar Rang Toli and extension program, a detailed outline of theatrical performances on the unsung heroes of independence was prepared for throughout the year.

The need for an institute of theater in the Jammu and Kashmir region was felt for a long time. Taking an initiative to set-out the theater activities in this area, which has been affected by terrorism for 3 decades, Dinesh Khanna signed an MOU with the Jammu and Kashmir Academy of Arts, Culture and Languages, in Srinagar on October 30, 2021.