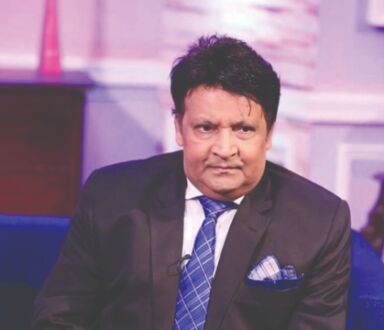 Karachi: Pakistan's celebrated comedian Umer Sharif passed away on Saturday in Germany where he was admitted to a hospital after his condition deteriorated while being flown to the US on an air ambulance to undergo a life-saving heart procedure. He was 66.

The veteran comedian, actor, producer and television personality had been battling for his life and was critically ill since last year.

Earlier this month, his family sought help from Prime Minister Imran Khan's Office to arrange a health visit to the US.

His departure through the air ambulance was delayed by a day or two as doctors at the private hospital where he was admitted in Karachi were reluctant to give him a clearance to undertake such a long journey.

Sharif, who was married thrice, was accompanied on the air ambulance by his third wife, Zareen, when he passed away.

His death was met with immediate shock and grief in Pakistan with Prime Minister Khan leading the condolence messages for the comedian legend.

Arts Council of Pakistan's president Ahmed Shah said he got the news about Sharif's death after speaking to his family.

"Yes, he passed away while in Germany. God grant him peace as he had been undergoing a lot of health problems since last year," Shah told PTI.

Pakistan's Ambassador to Germany Dr Mohammad Faisal said in a tweet: "With deep sorrow, it is announced that Mr Umer Sharif has passed away in Germany. Our deepest condolences to his family and friends. Our CG (Consulate-General) is present at the hospital to assist the family in every way".

Prime Minister Khan said that he was saddened to learn about Sharif's demise.

Khan said that he had "the good fortune" of touring with the comedian to raise funds for a hospital.

"He was one of our (greatest) entertainers and will be missed," he said.

The federal and Sindh provincial governments had arranged an air ambulance to send him to Washington to undergo an urgent life-saving heart procedure. Khan had sanctioned 40 million Pakistan Rupees for his treatment.

Sharif, who had undergone two heart bypass surgeries, left on the air ambulance on September 28. However, his condition deteriorated on the way and he was admitted to a hospital during a stopover in Germany.

The comedian, who was born on April 19, 1955, gained unparalleled popularity in the 80s, 90s and after 2000 and was equally popular in Pakistan and India.

Some critics even regard him as one of the greatest observational, stand-up, improvisational and character comedians produced in the subcontinent.

Umar, who started his career at the age of 14 years with stand-up comedy, has done around 60 stage comedy shows and other television shows, and also produced, directed and acted in two movies.

He became a rage when he turned to hosting late-night shows on television.

In 1989/90, two of his comedy plays -- Bakra Qiston Pe and Buddha Ghar Pe Hai -- were bumper box office hits in Pakistan and India while his film Mr 420 is regarded as one of the most successful films ever made in Pakistan.

Sharif received national awards for best director and best actor in 1992 for Mr. 420. He also received 10 Nigar Awards and so far, he is the only actor to receive four Nigar Awards in a single year.

He was also a recipient of the Tamgha-e-Imtiaz for his contributions as comedian, actor and producer in the entertainment industry.

Meanwhile, actors from both India and Pakistan started paying tribute to the comedy legend on social media.

Actor-comedian Jaaved Jaaferi said Shareef was not only a great artiste but also a socially and morally conscious human being.

"My heart is so so heavy with the news that the highly respected and legendary comedian #UmerSharif bhai passed away today. He not only had a unique 'andaz e bayaan' but was also a socially and morally conscious human being...," he tweeted.

"#UmerSharif sahib, you must be at peace now. You made us laugh so much and in end left all of us heartbroken. Go, regale the heaven with your jokes," Siddiqui tweeted.

Qamar wrote, "Saddened to learn about the passing of Umer Shareef... My deepest condolences to his family and fans."

Abbas said that nobody can match up to Sharif''s wit and sense of humour.

"Goodbye The King Of Comedy "Umer Shareef Sahab"! Seems like the chapter of Comedy is closed for good. Many will come and go but there was and will always be one and only Umer Sharif," he wrote.