Nushrratt is busy with her early morning shoots 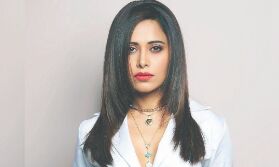 Nushrratt Bharuccha is currently shooting for a hush-hush project in Mumbai, ever since the lockdown norms were eased. The actress has been regular on social media, where she is seen giving her fans updated about her early morning schedules.

A source revealed, "Nushrratt has been shooting for an unannounced project in Mumbai right now, for a schedule of 25 days. She has to wake up every day at 3 am in morning, and reach the sets before 4 am. Nuushrratt's character is such that requires a heavy makeover, due to which she reaches sets at 7 AM to start rolling."

The source further opines, "Nushrratt's character in the film is such that has never been seen before, and will really surprise the audience once it is revealed."

Nushrratt is an avid social media user, and no one can see all about her morning schedules on her Instagram stories. She recently wrapped up dubbing for her another upcoming project, 'Chhorii', touted to be a horror drama. By the looks of it, Nushrratt is super excited to get back to sets, after the lockdown norms have relaxed.

On the work front, Nushrratt will be next seen in 'Ram Setu', 'Hurdang', 'Chhorii' and the unannounced project.