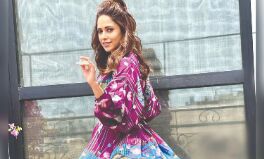 Nushrratt Bharuccha is on cloud nine as she has been nominated for the 'Best Actress' category at the 'Asian Contents Awards' for the 'Busan Film Festival'.

The 'Chhalaang' star, who is shooting for her upcoming film 'Janhit Mein Jaari', discovered the news from her manager.

The Bollywood actor expressed happiness and said she feels happy to see her name up there with other international names.

In a conversation with a leading daily, Nushrratt said that she had a very strenuous day as she was shooting in a remote place under the scorching sun with thousands of people bombarding on their set. She also said that she was the only person in the humidity shooting non-stop and smiling and dancing after hearing the news.

Nushrratt feels happy to see her name up there with other international names from different parts of the world. She has been nominated for essaying the role of Meenal in the short film 'Khilauna', a part of the 'Netflix' anthology 'Ajeeb Daastaans'.

Talking about what made her chose the project, Nushrratt said, "I read the script and liked it. I loved the story. For me, it has always been the script. I met Raj Mehta and while talking about the short film, we both were completing each other's sentences. We were on the same page. We both had the same vision, to be honest and truthful to the subject and narrative."

She also spoke about the most challenging part of playing a house help and said more than her, the director was worried.

"He was like, 'You have to forget the 'Chhote Chhote Peg' and 'Dil Chori' girl and become this person'. I even joked with him and asked if he wanted me to sweep the floor in 'Dharma' and show him. I think trust is very important and it works both ways," she shared.

The actor admitted, "I think for me, I become the person I play and the

vision we have. The reason why a lot of people reacted to my character in 'Ajeeb Daastaans' is that it was a cohesive effort."