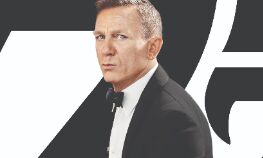 The 25th James Bond movie, 'No Time to Die', has whole-heartedly been embraced by the audiences. As per 'Forbes', the film has now crossed the 600 million dollars mark. 'No Time to Die' was the swan song for Daniel Craig as Bond.

While this is impressive, particularly during these COVID-19 affected times, the film had a budget of 250 million dollars. Once the marketing and promotions costs are added, it is unlikely the film has broken even yet.

Craig received a lot of praise for his performance in 'No Time to Die', with some saying it is the best performance of his career. Directed by Cary Joji Fukunaga and written by Neal Purvis, Robert Wade, Fukunaga and Phoebe Waller-Bridge, the film follows a jaded Bond who has retired from MI6 but gets recruited by the CIA to rescue a kidnapped scientist. Léa Seydoux, Ben Whishaw, Naomie Harris, Jeffrey Wright, Christoph Waltz, Rory Kinnear and Ralph Fiennes return from previous films. Rami Malek, Lashana Lynch, Billy Magnussen, Ana de Armas, David Dencik and Dali Benssalah join the franchise with 'No Time to Die'.

A leading news agency's critic gave the film a positive review, who wrote: "Craig does not just bruise, he hurts. He does not just ripple with muscle; he ripples with the creases that years of seeing unspeakable horrors have left on his face. And what a face that is - the crowning glory of this Bond, more than his body, which is nicely decked out variously from brief briefs to tight tuxedos. It has eyes that burn into you, it has lines that evoke its pain, it has a smile that warms your heart, it has a twinkle that few can resist and it has tears that flow down easily."