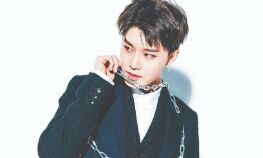 K-pop band NCT's Taeil broke the Guinness World Record of 'fastest time to reach one million followers on Instagram', as per the official website of the agency. He reached a million followers in just one hour and 45 minutes after his first post.

A week after launching his 'Instagram' account, the artist's follower count stands at 1.8 million. Currently, he has five posts on the photo-sharing platform and follows only seven people who are his NCT bandmates.

"Thank you to all the fans! I was so surprised when I heard the news! I never imagined myself becoming a 'Guinness World Records' titleholder and I'm truly grateful for all the love and support. I would not be here without my members and our NCTzens. I will try my best to connect and communicate even more through socials. I love you all!" said the singer.

Before Taeil, this record was held by 'Harry Potter' star Rupert Grint. Grint inaugurated his 'Instagram' with the announcement of his daughter's birth in November 2020. He managed to reach a million followers in four hours and one minute.

'Friends' star Jennifer Anniston was one of the previous holders of the record as her 'Instagram' debut got her a million followers in five hours and sixteen minutes. Aniston's first photo on the platform was a group photo with her 'Friends' co-stars.